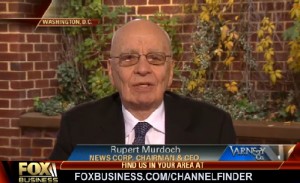 But it wasn’t all roses for Murdoch, who was in D.C. for the The Wall Street Journal CEO Conference, to which my invitation must have gotten lost in the mail. He spoke of being spooked by China’s rapid economic expansion:

What was really scary was when Larry Summers said [that] when we look back [from] the end of this century, people are not going to talk about this recession. Their going to talk about the rise of China. And how in the last 100 years or so, the standard of living in America has doubled every 30 years. In China, it’s doubling in less 10 years, every ten years.

Murdoch also expressed his alarm at the fact that there’s a Chinese town out there whose population exceeds that of Spain. “[The Chinese] already have enormous economic power,” he concluded. “I’m not saying they’d use it to hurt people, but they would use it certainly to help themselves.”

After giving Fox Business the skinny on the Far East, he turned his attention to domestic matters, giving a run down on our recession and our tax policies. When asked if the American economy could turn around in a year, he replied, “No, no, no, no. We’re still in a very deep recession.” Well, how do we get out? “Company taxes have got to come down” for the U.S. to stay competitive, he said. He mentioned lowering personal taxes too, while implementing a general 10% sales tax. Ultimately, he thinks that:

Government’s got to take a smaller part in our lives. That’s really what the Tea Party’s about. They’re not extremists, they’re moderate centrists.

But, perhaps most importantly, Murdoch also talked about the strongest sector of the U.S. economy: the Avatar industry. He confirmed,

Yes, well, [Avatar 2] will take three years to make. That’s coming, and Avatar 3. We are making them together.

Finally, some good news. Watch the interviews for yourself in the Fox Business clips below. The first one covers China and Avatar, while the second focuses on our own economy.