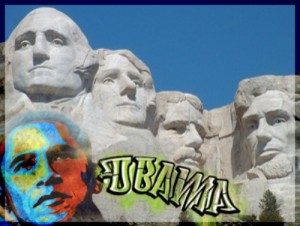 Conservative radio host and serial race-baiter Rush Limbaugh has done it again. To no one’s surprise, Limbaugh accompanied a rant about how Barack Obama’s presidency is “graffiti on the walls of American history” with both a reference to Obama’s “gang,” and a mock-up of a “tagged” Mount Rushmore on his website.

The Atlantic’s Andrew Sullivan calls Rush out for his worn-out tactics, but fails to put a fine enough point on it. Rush Limbaugh is not only a race-baiter, he is a coward. Listen to the segment after the jump. (h/t Oliver Willis)

Here’s the clip from The Rush Limbaugh Show:

This guy is an utter wrecking ball all by himself on the world stage to the point now of getting embarrassing.  This presidency of Obama’s, it doesn’t take much to irritate the left. Try this:  “Barack Obama’s presidency is graffiti on the walls of American history.”  That’s what his administration is.  No more than graffiti on the walls of American history.  We have a juvenile delinquent for a president who has ruined so much public and private property, not even his gang is making much of an effort here to protect him.  It’s an utter disaster.

Sullivan asks if there’s anyone more adept at exploiting racial dog whistles, noting “It’s always egregious enough to be calculatingly offensive, but never quite an open and shut case, because most of all the talk radio host revels in being called a racist so that he can throw up his hands and complain about liberal race-baiting.”

True, except it is an open and shut case. Limbaugh’s time-tested modus operandi is to toss out some limp disclaimer, like he’s just “tweaking” the “drive-by media,” or in this case, “irritat(ing) the left,” but they hold no logical water. Intentionally conflating the first black President with an urban gang tagger isn’t irritating to “the left,” it’s irritating to everyone but the racists and race-baiters.

While Sullivan identifies the “self-consciousness” as what makes this “so disgusting,” the really nauseating thing here is the cowardice. Rush Limbaugh is probably one of the few media superstars who doesn’t need to hide behind coy, impish disclaimers. Nobody’s ever going to fire him. Despite that fact, he continues to rely on these slight fig leaves as a way to disown his divisive intent. No sale. Case closed.