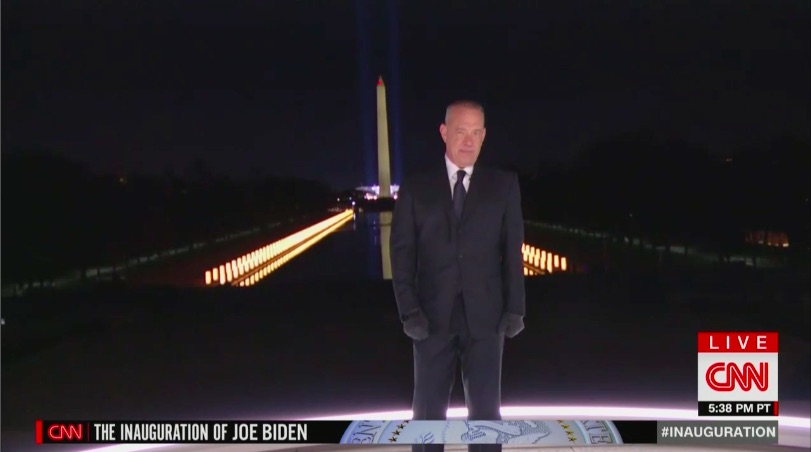 Or, that seemed to be the case, at least, as a clearly chilled and coat-less Hanks ignited an outpouring of concern online as he hosted the new president’s inaugural celebration on a cold night in Washington, D.C.

Stay tuned at 10:00 for the telethon to save Tom Hanks from hypothermia

Just watching Tom Hanks out there makes me want to turn up the heat here.

Day one of the Biden presidency and the closest thing to a controversy on Twitter is people politely pleading for Tom Hanks to put on a coat.

Someone should have given Bernie’s jacket and mittens to Tom Hanks.

If I walk with “I saw Lady Gaga this morning” energy can I get past security to give @tomhanks a coat?

Who is going to defrost Tom Hanks at the end of this?

The country finally comes together, united in concern about Tom Hanks being under-dressed for the weather.

I’m comforted by how cold Tom Hanks looks. He’s freezing his billionaire ass off. For us. To bring us some peace of mind.

Sen. Cory Booker just took a Lyft to the Lincoln Memorial with an extra coat in hand for Tom Hanks. I’m sure this is happening. I don’t need it confirmed.

And a few concerned citizens and amateur historians referenced the ninth president, who died of pneumonia just 31 days into office after a two-plus hour Inauguration speech on a cold and rainy day.

I know William Henry Harrison doesn’t get many tributes, but I’d still feel better if Tom Hanks would put on an overcoat https://t.co/nJYytTgVUu

Does Tom Hanks know what happened to William Henry Harrison?

But just so you know, he survived the night and is still safe and sound.