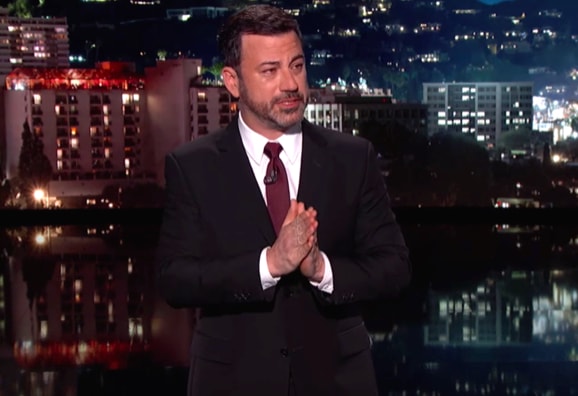 Like most late-night comedians, Jimmy Kimmel has been politically-charged since President Trump took office, but in recent months he has morphed from being an entertainer to being an activist.

His transition began in May after he shared his deeply-personal story about his son’s open-heart surgery that became a launching pad for his call for what he basically described was universal health care.

“Before 2014, if you were born with congenital heart disease, like my son was, there was a good chance you’d never be able to get health insurance because you had a pre-existing condition. You were born with a pre-existing condition,” he said. “No parent should ever have to decide if they can afford to save their child’s life. If your baby is going to die and it doesn’t have to, it shouldn’t matter how much money you make. Whether you’re a Republican or Democrat or something else, we all agree on that.”

Then after the Las Vegas massacre, Kimmel gave an emotional plea for gun control, calling out the “people who vote with the NRA.” He even attacked his critics by saying they “bear some responsibility” that “almost anyone can get any weapon they want.”

Give me a break!

While Chuck Schumer was feeding Kimmel talking points, the epidemic of sexual harassment in Hollywood hit a boiling point after film mogul Harvey Weinstein was exposed for preying on countless women for decades.

Kimmel and his late-night colleagues were hesitant to address the scandal last week when it broke. Neither did Saturday Night Live.

On Monday, they had no choice but to address it. Stephen Colbert mocked Weinstein. Jimmy Fallon had a one-liner. Seth Meyers had female writers roast Weinstein’s apology.

But Kimmel did something different. Instead of going after Weinstein directly, he used a Twitter feud he had with Donald Trump Jr. and spent most of his time mocking him and his father than on the growing scandal. It was as if the scandal was an afterthought, like it didn’t really matter to him.

Since Monday, Kimmel hasn’t mentioned Weinstein on his show. To be fair, the other comedians haven’t focused on him much either, but they’d still crack a joke or two at his expense. Meanwhile, the controversy has grown. Between Weinstein being accused of rape and more high-profile accusers like Gwyneth Paltrow and Angelina Jolie coming forward, the scandal has rocked Hollywood like a Hurricane Harvey. And it has sparked even more controversies, with numerous individuals from Kathie Lee Gifford and Terry Crews sharing their own sexual harassment stories to others like Ben Affleck being accused of groping women (which he sheepishly apologized for… 14 years later). And it’s not just affecting Hollywood. Democrats have been running scared since they’ve taken thousands of dollars from Weinstein over the years and Hillary Clinton and the Obamas were slammed for not commenting on the controversy sooner. And now NBC News is being accused of covering up the story after its reporter Ronan Farrow took the story to The New Yorker. The Weinstein scandal has become an avalanche and there is no indication where it will stop.

Which begs the question: where’s Kimmel’s outrage? Isn’t he supposed to be the “moral compass” of our generation? Why isn’t he shedding a tear for any of Weinstein’s victims?

It has become clear that he would rather lecture America and push his own political agenda than address the problems happening in his own backyard. He cries that everyone should have health care and that guns are the problem without providing any real solutions, yet he’s silent on the out-of-control abuse women have faced in showbiz for years. Perhaps it’s because he doesn’t want to shame any of his friends like Affleck or Matt Damon, who was accused of helping bury the scandal back in 2004. Or maybe it’s because Kimmel has his own history of objectifying women.

Sexual harassment is a problem all over the place, but it’s alive and well in Hollywood. They pretend to be a bunch of progressive feminists who spout their morals to Middle America. In real life, it’s a never-ending episode of Mad Men. In the past week, we’ve learned the disgusting things Weinstein has done over the years (and I’m sure we’ll learn more in the days and weeks to come). Frankly, he’s making Bill Cosby look like Dr. Huxtable. And we all know Weinstein isn’t the only creep. Roger Ailes and Bill O’Reilly have already been outed at Fox News, but there are plenty of sexual predators still roaming the streets of LA, using their power to manipulate women, pressuring them to cave to perverted sexual desires in order to save their careers or destroy their lives if they don’t.

The left has every right to praise Kimmel for tackling health care and gun control, but they should demand him to lead the fight against sexual harassment in Hollywood, where he has much bigger clout than he does in D.C. My guess is that Kimmel won’t accept such a challenge because on this issue, he’s perfectly fine with the status quo because it doesn’t affect him. He’ll keep doing what he’s doing; mock Trump and earn millions.