Hillary Clinton Pines For The Days When Her Lies Went Unchallenged 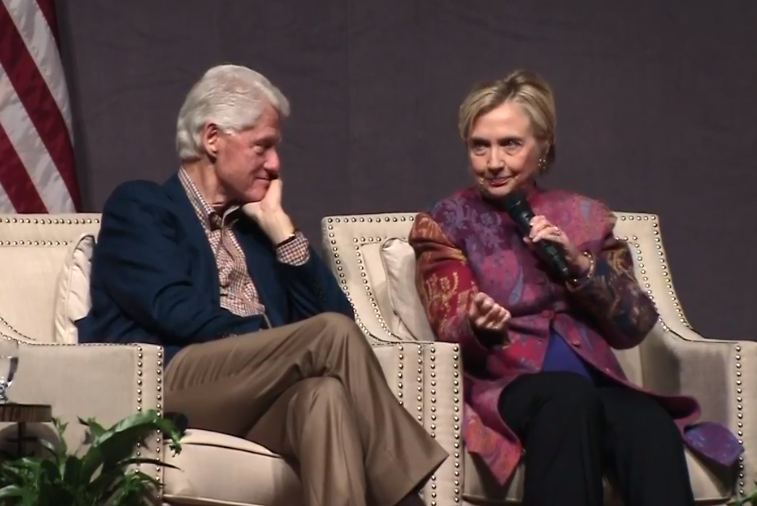 Speaking at a Clinton Foundation event celebrating the 25th anniversary of Bill Clinton being elected president, Hillary Clinton lamented the existence of Fox News and other media outlets established after 1992.

Peter Hasson from The Daily Caller watched the event (full video embedded below) and grabbed this little nugget during an interview with both Clintons conducted by James Carville:

Hillary Clinton: Bill probably wouldn’t have 'survived' If Fox News had been around in 1992 pic.twitter.com/BettIzGWNS

“Unfortunately our body politic’s immune system has been impaired because there has been a concerted effort starting with the creation of the Fox network — it wasn’t there when Bill first ran, it was one of the reasons he probably survived, it was there when he ran the second time — it and all of its associated media outlets who are by no means delivering news. They are delivering partisan advocacy positions irrespective of the truth, the facts, the evidence,” Clinton said.

Many partisans in the media – meaning the vast majority of journalists, writers, editors, anchors, and producers – will righteously nod in vigorous agreement with such an insightful observation. I mean, partisan advocacy has no place in the media or journalism, does it?

But, Mrs. Clinton revealed during a different part of the same event exactly how the pre-Fox News media landscape was a cesspool of echo chamber agreement and partisan advocacy for the Clintons in 1992.  The three political legends waxed poetic about that time they made a fake news story out of an election loss and, more importantly, how the media took their lie and ran with it.

During an exchange about the Hillary glowed about the Clinton campaign’s political strategy during the 1992 New Hampshire Primary. The Clintons were under fire for media reports about Bill’s past sexual dalliances as Governor of Arkansas which made Harvey Weinstein look like an amateur.   Hillary praised Carville and her husband’s “brilliant strategic decisions” after the primary that amounted to, basically, a big lie that the media swallowed hook, line, and sinker.

“Bill basically claimed victory even though he had finished second. And it was an explosion because he lost, but compared to what we thought would happen, he’d won big,” Hillary exclaimed as Bill, James and the audience of adoring acolytes laughed in fond and nostalgic remembrance.

After coming in second place in the primary, Clinton took the podium while votes were still being tallied and proclaimed that the voters had made him “The Comeback Kid”:

And before you knew it, that was the main talking point regurgitated by journalists across the media. Clinton was “The Comeback Kid.” A political talking point designed to spin an election loss had become what amounted to an objective fact reported by the three major news networks and CNN.

Carville and the Clintons had given them what they needed. Not facts. Not information. Spin. And it allowed them to waltz right into the White House. It wasn’t the first lie of the 1992 election and it certainly wasn’t the last from the Clintons that the media ran with. Remember President George H. W. Bush not understanding how a checkout scanner worked? Yup, that was a big lie but the New York Times wrote it up as if it was as true as a report from Walter Duranty praising the great Josef Stalin.

So as journalists search the souls of their profession, joining Mrs. Clinton in her lament over the existence of Fox News and conservative websites, please recognize what she’s really saying. She misses the good old days when there were fewer news outlets repeating their bullshit unchallenged.