No, the Press is Not the Trump-Billed ‘Enemy of the People.’ They Are Actually His Best Friend
Opinion

No, the Press is Not the Trump-Billed ‘Enemy of the People.’ They Are Actually His Best Friend 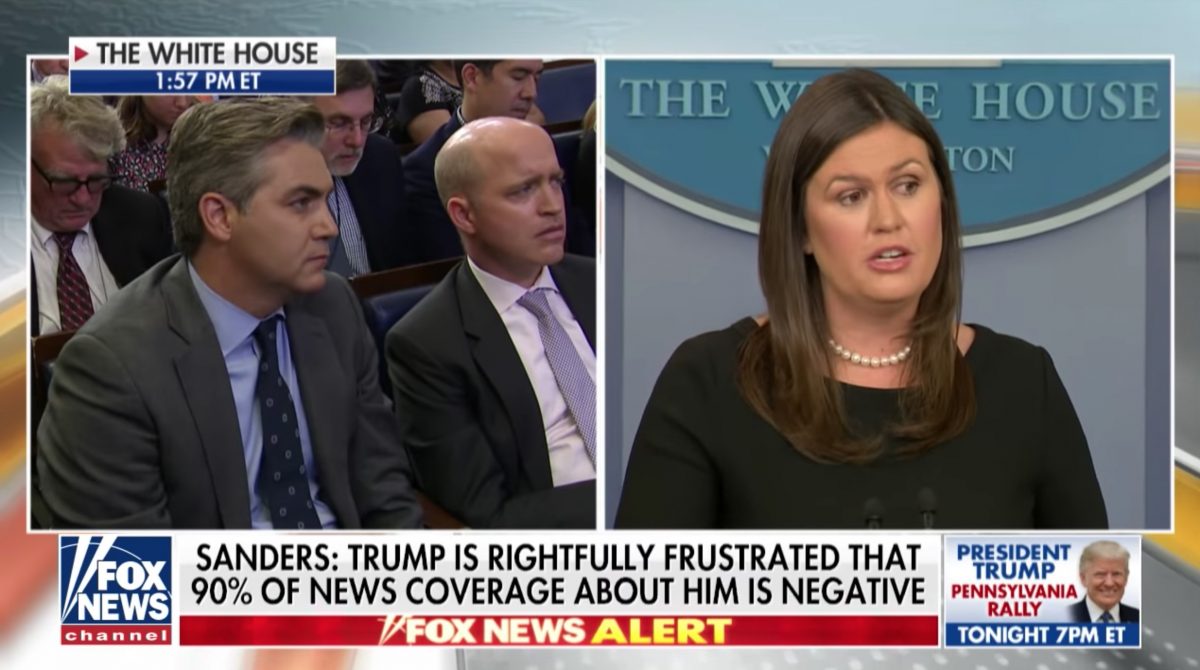 On Thursday, the biggest issue of the news cycle was whether the president of the United States really thinks that the press is an “enemy of the people.” This debate far overshadowed the startling revelation that our top intelligence official now admits that he still has no idea what really happened at the inexplicable Helsinki summit, but we all know that people in the media love nothing more than talking about themselves.

Previously, President Donald Trump has indeed called the press the “enemy of the people,” but when his “favorite” daughter Ivanka said in an interview that she disagrees with her father about that assessment, it ignited a fresh series of news stories. Trump himself weighed in on the topic by slightly adjusting his phrasing, saying that it is specifically “Fake News!” which is the “enemy of the people.”

But the main event came at the White House press briefing when CNN’s grandstanding egomaniac Jim Acosta confronted Trump’s truth-challenged press secretary Sarah Sanders about whether the administration really views the media this way.  Despite Acosta’s most self-aggrandizing efforts, she refused to say that the press is not the “enemy of the people” (though it appears that no one has ever even actually bothered to define what the heck that phrase really means).

As a conservative who has long loathed the mainstream news media for a variety of substantive reasons, it is clear that there are a lot of very negative things which can and should be said about the press. In general, they very often lazy, dumb, cowardly, biased, isolated, spoiled, frivolous, sensationalistic, and far too obsessed with easy narratives and ratings.

Despite all of that, “enemy of the people” just doesn’t seem to fit. First off, as much as I inherently mistrust the press, I do sincerely believe that the vast majority of major media members do honestly love their country. Plus, with their devotion to content that is exclusively ratings-friendly, if anything, the modern media panders way too much to the people (or at least the targeted demographic of the outlet which currently pays them).

Of course, to President Trump, when he says “enemy of the people,” he really means an “enemy of Trump.” This is simply how he views the world. If you say nice things about Trump you are a friend, if you say bad things about Trump, you are the enemy. Almost nothing else matters in how he makes such determinations, which was fine when he hosted The Apprentice, but not so great when he is supposedly the leader of the free world.

Like it is so often the case now in this increasingly upside-down world, however, the truth about Trump’s relationship with the press is not only very different from what it is perceived to be, but it is actually the exact opposite of what the conventional wisdom would suggest.

In fact, this phenomenon is an important factor in interpreting nearly every controversial statement Trump makes. When Trump is lying, he often doesn’t just say something which is untrue, he strategically says something 180 degrees from the truth (“No president has been tougher on Russia than me!”) under the sound presumption that this buffer zone will make it much more difficult for his fans to figure out what is really going on.

There may be no better example of this tactic than Trump’s fake war with the press. Does Trump truly hate the negative things that the non-state-run media outlets say about him? Of course he does. His ego is just far too fragile for it not to impact him personally.

But, like a suitor in a love-hate relationship that somehow finds a way to work for both parties, there is the political portion of him which desperately desires the mainstream media to attack him just as much as they need him to sustain their flow of easily obtained ratings-friendly content.

As impossible as it probably is for many liberals to comprehend, most Republicans see the extreme level of media criticism leveled at Trump, especially right after eight years in which the press mostly waved pom-poms for Barack Obama, as proof that he is doing something RIGHT! And because it is inevitable that media outlets all competing to find the most compelling dirt on Trump will make some mistakes, it allows Trump’s “Fake News!” canard (which really means “news that is at least mostly true that I don’t want you to believe”) to gain traction as a substance-free weapon against all attacks.

In short, if the news media wasn’t, understandably, so out to get Trump, he wouldn’t be nearly as popular with his base. I have compared Trump to O.J. Simpson several times before, but this situation is not unlike black people strongly embracing Simpson only after the LAPD, white people, and the news media started calling him a double murderer.

Conversely, Trump has often stated, quite correctly, that the news media badly needs Trump around in order to keep the news industry from suffering a catastrophic collapse in content and ratings. This is why they gave him over two billion dollars (never forget!) in free advertising during the 2016 primaries and why he may very well be right that they will get him reelected.

So let’s be clear about what is really going on in this phony battle. Trump plays to his base and protects himself from legitimate criticism by discrediting the media. The state-run media gets something they can constantly attack without having to directly defend Trump. Most of the rest of the media plays the martyr and pretends to be fighting to save the country, when in reality they care far more about their own celebrity and job security, which fighting with Trump enhances.

Everyone wins! Except, of course, those who still care most about the truth and the country.