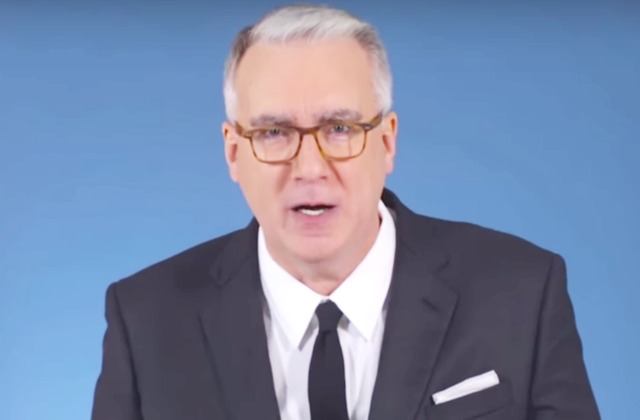 All of these important, ethical questions will be answered in this humble column after we relay the details of GQ’s (formerly ESPN’s/formerly Current TV’s/formerly MSNBC’s/formerly Fox Sports’/formerly ESPN’s) Keith Olbermann and his vulgar criticism of — and then forced apology to — Secretary of Education Betsy DeVos.

The story begins on Twitter and is, as detailed by John Sexton at Hot Air, as old as Twitter itself.

First DeVos delivered a message to the people of the Texas Gulf Coast on Saturday morning as the devastation wrought by Hurricane Harvey began to emerge to the public’s eye:

Our prayers are with all those in the path of #HurricaneHarvey. @usedgov stands ready to assist impacted schools.

Olbermann quickly responded in his characteristically classy and understated way:

The hurricane is going to do less damage to schools than you are, Motherfucker https://t.co/D71GP8Qnw0

The profane response was actually more popular on social media than Devos’ original statement thus providing more attention to the Education Secretary’s sentiments than would originally been garnered. This is typical of social media. A smart ass takes an innocuous tweet, re-frames it to meet their own political/comedic/ironic needs. Their social media followers go nuts with approval (or their social media enemies go nuts with outrage) and everyone keeps “liking” or “Re-tweeting” until the the President tweets something about James Comey.

Tale as old as time.

But this time, a journalist at USA Today decided to ask a simple question: How does GQ (and their parent company Condé Nast) feel about one of their high-profile stars using a vulgarity like this toward a cabinet official?

David Mastio chronicles the timeline and exchanges with GQ in great detail, but suffice to say that only after he took his challenges over the vulgar tweet public (again on Twitter) did the publication assure Mastio that something would be coming soon on Olbermann’s timeline to rectify the matter.

Let’s pause a moment and recap the Twitter angle on this fascinating, new media story:

Which brings us to the aforementioned, sincere apology without any reservation:

I apologize without reservation to @BetsyDeVosED for the gutter language. I'll reserve it for people who truly deserve it. pic.twitter.com/M83BFBQ2Uy

Forgive us if we are skeptical of the sincerity of this apology, but, let’s face it, we live in an age (in a week, actually) where Kathy Griffin’s very public and tear-drenched apology tour from several months ago over her display of a pretend severed head of President Trump was (again, in a TWEET) rescinded and the bipartisan outrage over her actions was laughed-off as bulls***. (What is it with the Left and their language?) So when Griffin can just claim a “do-over” on her apology, how seriously should we take Olbermann’s?

We’ll let the reader decide whether they feel charitable enough to take Olbermann at his word. Judge him through the prism of his history and past behavior.

And, should we predict a re-write (or re-tweet) on this apology when it serves Olbermann to take it back as it did Griffin this week?

Who can predict? One thing, perhaps, is a safe prediction to make: Olbermann will soon be labeled as “formerly of GQ” as he seems to overstay his welcome with employers and co-workers faster than Anthony Scaramucci’s tenure at the White House.

One thing we can all agree on: Keith Olbermann is sorry, all right. Very, very sorry: