Trump: Advisers ‘Didn’t Want Me to Use the Word’ Murdered During Pentagon 9/11 Ceremony 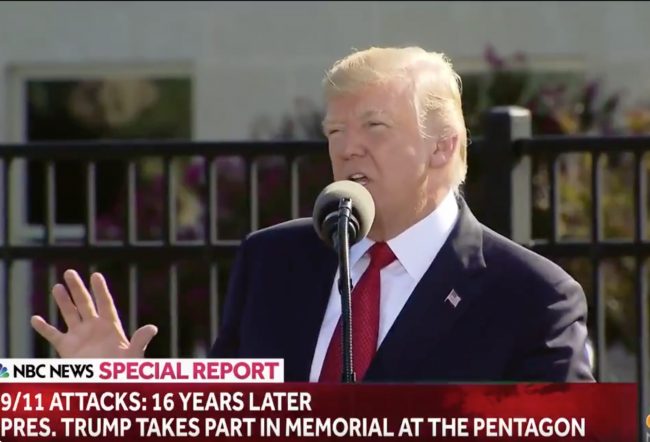 In his remarks at the 9/11 remembrance ceremonies in Washington DC Monday, President Donald Trump said, “today, our entire nation grieves with you and with every family of those 2,977 innocent souls who were murdered by terrorists 16 years ago.”

But, according to a member of the 9/11 Memorial Foundation, the president was advised not to use the word “murdered.”

Debra Burlingame, whose brother Chic Burlingame was the pilot of American Airlines flight 77 which ended up being deliberately crashed into the Pentagon, was at the ceremonies and relayed to me the conversation she had with the president immediately after his speech:

Burlingame: Let me tell you something, I was pleased with what he said today. In fact, I normally don’t go pushing myself into rope lines but I pushed myself into this one today and I shook, introduced myself to the President. I shook his hand and I thanked him. I thanked him for using the word ‘murdered’. That they murdered… these people murdered innocent people. And he chuckled. And he said, ‘They didn’t want me to use that word. They didn’t want me to say that.’ And I assumed he meant they the speech writers or his advisers and I said, ‘well they were wrong and I’m very very glad that you did use that word’.

The anecdote is reminiscent of Ronald Reagan‘s advisers removing the now-famous reference of the Soviet Union as an evil empire in his speech to National Association of Evangelicals in Orlando, FL in 1983.

Trump made the fact that President Obama rarely used the term “radical Islamic terrorists” in describing the perpetrators of Jihadist attacks into an effective campaign issue when running in 2016. The use of the word “murdered” rather than “killed” in these remarks reflect a moral distinction that many believe was not drawn during the Obama years.

Burlingame shared this story during an exclusive interview with me on WMAL radio in Washington DC.