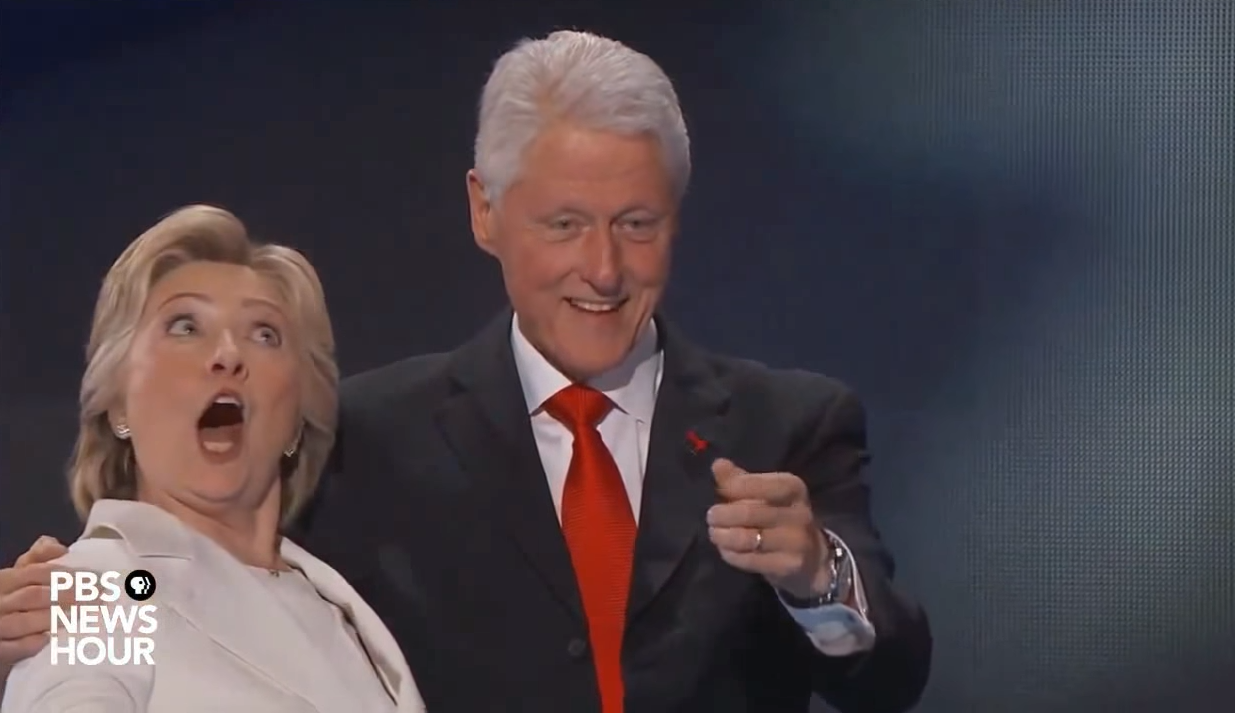 The Washington Post acknowledged the one year anniversary of the 2016 presidential election by offering readers an alternate timeline wherein Hillary Clinton did not end up wandering aimlessly in the woods of Chappaqua, drowning her sorrows in buckets of Chardonnay but, instead, won the election and ascended to her rightful place on her throne in the Oval Office as President of the United States.

The Style section article titled “What if Hillary had won? A jolly trip down memory lane, alternate-timeline edition” is clearly a witty exercise in satire and it is accompanied by a alternate reality newscast imagined by the creative minds at the Post.

It’s literally “Fake News” and you’d think the folks at the Post would be sensitive to even satirically crossing the border into that realm. So good on them for being so bold.

Some excerpts of the pretend world WaPo celebrated this week show the truly creative minds on staff at the Post:

On Inauguration Day, President Hillary Rodham Clinton took the oath in a headband and a pantsuit. Hey, it was rainy, and what does she care what you think anymore? That night, Lin-Manuel Miranda brought the house down with a freestyle rap at her first inaugural ball, while new White House co-chief strategists/toasts of the town Robby Mook and Donna Brazile set Twitter afire with their exuberant choreographed dance.

The Lin-Manuel Miranda line made me laugh out loud and, simultaneously so grateful that Trump won because that “freestyle rap” would have totally happened. And it would be universally praised for its utter brilliance. But, truthfully, every white journo inside the Beltway wouldn’t dare express their actual reactions to the lameness of any freestyle rap, let alone one delivered by Broadway-boy Miranda. Come on, can we just admit, once and for all, that when he does stuff like this it’s totally lame?

I absolutely love Hamilton. But this stuff is cringe-worthy. Awful.

OK, back to the WaPo/Hillary wet dream:

In February, a PricewaterhouseCoopers accountant accidentally handed Faye Dunaway a spare best-actress envelope backstage at the Academy Awards, and she opened it and declared that “La La Land” had won Best Picture. But that was okay, because the Hollywood community, smug in the afterglow of a Hillary victory, had actually voted for “La La Land,” feeling no impetus to send a message by boosting a melancholy indie pic about a gay African American drug dealer.

There’s a lot of truth to that. I have no other reaction. Let’s move on:

By October, there had been three state dinners. Barbra Streisand attended two of them.  Clinton continues to try to connect with voters by scrutinizing video of her previous endearing moments and attempting to re-create them. She does a sassy shoulder shimmy at least three times per public event now. She dresses only in Suffragette White. Nothing is quite landing, though, because American governance has ground to a halt. Her approval rating is 42 percent.

I suspect that by the time most Washingtonians made there way down to this part of the column they might be wondering if something went wrong with the fantasy world created by Ben Terris, Dan Zak, Monica Hesse and Amy Argetsinger, the co-authors of the column. You see, this always ends up being the problem with satire when it is delivered in a truly creative and artful way (and this piece truly is creative.)

“Satire,” Jonathan Swift wrote, “is a sort of glass wherein beholders do generally discover everybody’s face but their own.”

When Saturday Night Live or The Daily Show or John Oliver lampoon one side of the political equation that is not represented in their writers’ room or in their audience, they’re welcomed with howls of laughter and whooping cheers from the grateful partisans gleeful that their reality is validated by the biting wit of satire directed at their political or social enemies.

But if satire is delivered in such a way that it allows a small glimpse of reality to the viewer and they have to examine their own truths rather than just mock others’ it starts to become uncomfortable.

By the end of the alternate reality the pretend President Hillary is being impeached:

With the Resolute Desk stocked with boxes of chardonnay, the president is secretly organizing notes for her own book. Scrawled at the top of her legal pad, in capital letters, underlined three times, are the words “WHAT HAPPENED.”