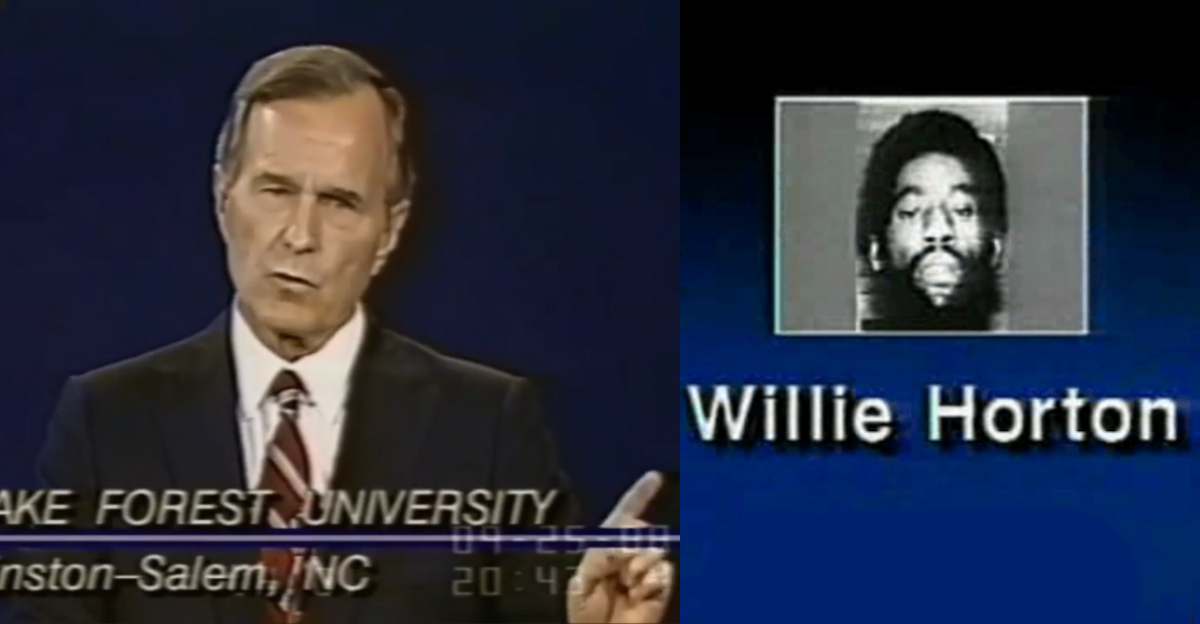 The passing of former President George H.W. Bush has been met with the familiar mixture of lionization, and insistent criticism in the face of demands that no ill be spoken of the dead.

In general a good impulse, but one that inevitably leads to some factually suspect revisionism, as when NBC News’ Andrea Mitchell claimed that Bush 41’s policies led to “balanced budgets” under George W. Bush, despite the fact that W. never actually balanced a budget.

Conversely, any critical assessment of Bush’s legacy must include the infamous Willie Horton ad that cast a racist pall over the 1988 presidential campaign. Unfortunately, some conservatives have tried to whitewash Bush’s involvement in that attack. For example, The Daily Caller tried to simultaneously claim that the Horton ad wasn’t racist, while also distancing Bush from the very not-racist ad:

The most popular liberal grievance against Bush was the famous “Willie Horton ad” in the 1988 campaign. Liberals declared it to be racist, even though nothing about the ad was untrue, and blamed Bush for it, even though it was run by an outside group and not by the Bush campaign or with their blessing.

Fox News commentator Brit Hume tried to make a similar distinction over the weekend as well.

Aside from the curious logic of defending the ad as not racist while insisting Bush had nothing to do with the not-racist ad, their claim obscures the fact that Bush not only blessed the Horton attack, he leveled it himself during a nationally-televised debate. On Sept. 25, 1988, Bush invoked Horton by name, as well as the rape that Horton committed after he was furloughed from prison:

“I’m not going to furlough men like Willie Horton, and I would meet with their, the victims of his last escapade, the rape and the brutalization of the family down there in Maryland.”

William R. Horton is a convicted murderer who escaped while on furlough from prison in Massachusetts. During the 1988 Democratic presidential primary campaign, then-Senator Al Gore brought up the furlough program during a debate with then-Governor Michael Dukakis, but didn’t mention Horton by name.

Beginning in June, after Dukakis secured the Democratic nomination, Bush began invoking Horton by name at campaign events, along with a description of his crimes. It wasn’t until September — months after Bush began his attacks — that an independent political action committee (PAC) began running an ad that featured Horton’s photograph.

Bush’s campaign released its own ad attacking Dukakis over the furlough program, one which did not feature Horton’s name or image. But Bush’s continued use of Horton to attack Dukakis makes it difficult to believe that he had any objection to it. The fact that Horton wasn’t featured in the Bush campaign’s follow-up ad is of little relevance, since news coverage of the PAC ad did that job for them.

And as noted by Mediaite’s Aidan McLaughlin last month, Bush 1988 campaign manager Lee Atwater would later apologize for the Horton attacks, acknowledging that “it makes me sound racist, which I am not.”

There is a story about a fellow named Willie Horton who for all I know may end up to be Dukakis’ running mate. Dukakis is making Hamlet look like the rock of Gibraltar in the way he’s acted on this. [This was a reference to Dukakis’ search for a vice-presidential candidate.] The guy was on TV about a month ago and he said you’ll never see me standing in the driveway of my house talking to these candidates. And guess what, on Monday, I saw in the driveway of his house? Jesse Jackson. So anyway, maybe he’ll put this Willie Horton guy on the ticket after all is said and done.

That’s as clear a confession of the campaign’s racist intent as you can get, and it predated the Horton ad by four months.

It would be unfair, though, to excoriate the Bush campaign without properly contextualizing the Willie Horton episode. Republicans have been engaged in a decades-long campaign to exploit racism, and have even admitted to it. In 2005, the sitting chairman of the Republican National Committee copped to it during a speech to the NAACP:

“Some Republicans gave up on winning the African American vote, looking the other way or trying to benefit politically from racial polarization. I am here today as the Republican chairman to tell you we were wrong.”

The same Republicans who express revulsion at Donald Trump‘s overt racism continue to worship one of the Southern Strategy’s most skilled practitioners, Ronald Reagan. Reagan kicked off his 1980 general election presidential campaign with a speech on “states’ rights” in Philadelphia, Mississippi, where three civil rights activists were murdered in 1964. This was a fairly obvious appeal to white resentment, and perfectly in character with Reagan’s familiar use of “welfare queens” and t-bone steak-buying “young bucks.”

And GOP strategist Alex Castellanos, who produced an even more explicitly racist ad than the Horton spot, is still welcomed as a guest on political talk shows.

The exploitation of racism by Republicans was normal for decades before Trump, and before Willie Horton. George H.W. Bush didn’t invent it, but conservatives should not pretend he didn’t participate in it.

Perhaps there’s a lesson to be taken from some remarks that Bush made a few weeks after he attacked Dukakis at that debate. At the 1988 Alfred E. Smith Memorial Dinner, Bush talked about the “bigotry” that Smith faced while running for president, and about Smith’s desire to be a voice for the voiceless.

“It’s been said that my party has sometimes been slow to be sensitive to some of the things I’ve mentioned, and there’s a bit of truth in that,” Bush said. “But parties, like nations, evolve. Great parties learn. Great parties feel the rhythm and the rock of the societies they represent, and mine is a great party.”