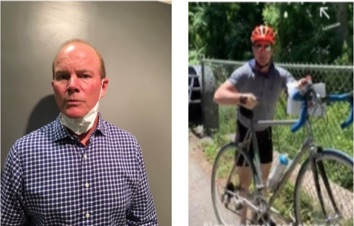 Maryland National Capital Park Police arrested a suspect from a viral video of an incident on Monday, in which an unidentified white man on a bicycle is seen assaulting three teenagers who were hanging posters in support of George Floyd along a bike trail.

The video spread across social media through the week and outraged peaked on Thursday as cable news began showing the clip, which prompted CNN host Don Lemon to slam the man’s behavior: “What an ass!” As is common when a massive backlash rages across the Internet, a furious hunt began to name the man who accosted the teens and violently ripped the posters from a teenage girl’s hands.

On Friday, according to a MNC Park Police press release, a 60-year-old Kensington, Maryland man was arrested after hundreds of tips flooded into the department. The name of the man arrested, Anthony Brennan, was not the name that began trending on Twitter on Friday after thousands of accounts falsely identified a former Maryland police officer as the culprit.

Thanks to tips from the community we identifed a suspect in the assault on the Capital Crescent Trail. A short while ago, Anthony Brennan 3rd of Kensington MD was taken into custody on the strength of a District Court arrest warrant. Official press release is available below.

“Detectives in the Investigative Section utilized various sources to further corroborate the information provided by the community before developing Mr. Brennan as a primary suspect,” the MNC Park Police said. “Contact was made with Mr. Brennan and his legal counsel earlier today. Consent was provided to search his home while members of the State’s Attorney’s Office and Park Police were present. Items of evidentiary value were seized. A subsequent arrest warrant was obtained and served on Mr. Brennan this evening after he voluntarily turned himself into detectives.”