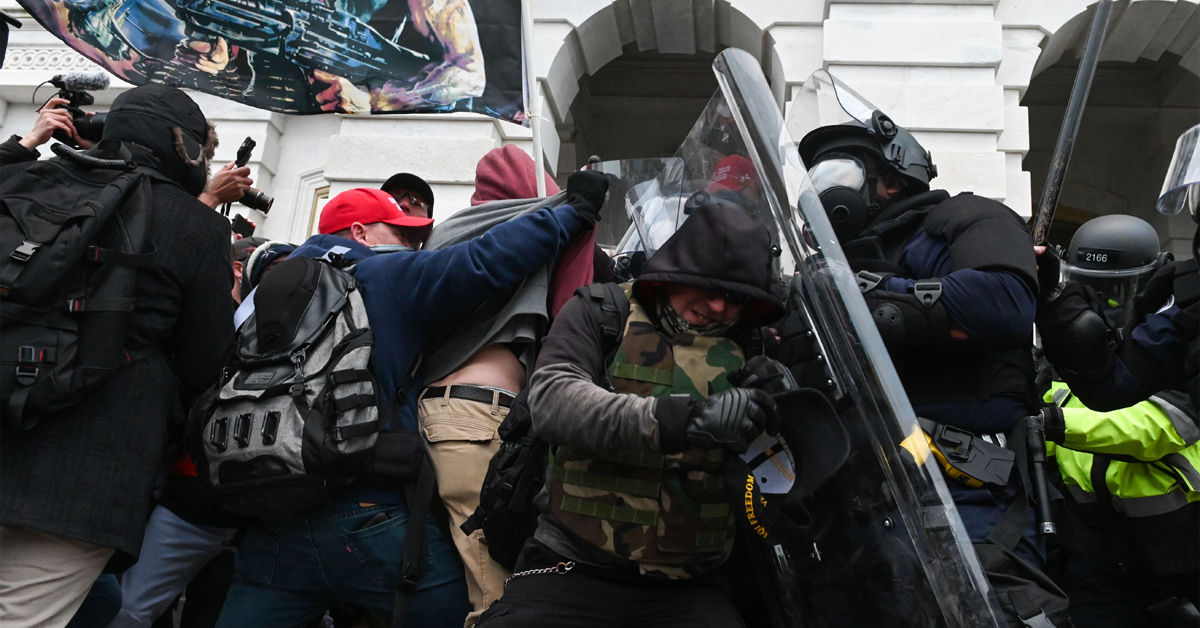 There is more wackiness in this story than can fit in one headline, so buckle up. An interesting job history, a unique investigation and arrest, a truly bonkers court hearing, and a court-ordered cross-country road trip. Of course, it involves a Florida Man.

Meet James Beeks, also known by the stage name of “James T. Justis.” He’s a 49-year-old Michael Jackson impersonator and was playing Judas in a touring production of Jesus Christ Superstar until he he was arrested by the FBI last week for his alleged involvement in the Jan. 6 riot at the U.S. Capitol. Photo of James Beeks via FBI.

Beeks also reportedly joined the Oath Keepers shortly before the events at the Capitol, with the FBI confirming that he had paid dues to the far right militia group on Dec. 21, 2020, according to Politico.

The Department of Justice’s press release announcing Beek’s arrest on Nov. 23 described him as wearing “a Michael Jackson ‘BAD’ world tour jacket and a black helmet” and “carrying what appeared to be a homemade black shield” when he met up with other Oath Keepers while walking from the Ellipse to the Capitol on Jan. 6.

He and the Oath Keepers then allegedly “marched in ‘stack’ formation into the Capitol grounds and then up the east steps of the Capitol to the area outside of the Rotunda doors.” The FBI described this group as “a mob of people, including some who attacked law enforcement,” with details about their movements and actions captured by photos and videos taken within the Capitol that day.

Beeks was not arrested until last week because it took awhile for investigators to identify him, but his unique attire and information provided by another Jan. 6 defendant — confirmed by Beeks’ cell phone data showing him traveling from his Central Florida area residence to D.C. — helped the FBI track him down.

He was arrested in Milwaukee, the latest stop for the touring production of Jesus Christ Superstar. The current version of the tour’s website has removed Beeks from the cast page, but his photo can be viewed in this archived capture from October. According to the arrest warrant, FBI agents “observed” Beeks’ performance twice before he was arrested.

Beeks’ court hearing on Monday, held by videoconference, was the kind of standard proceeding that normally gets no media attention, but Politico’s Kyle Cheney was monitoring it and live-tweeted a series of bonkers comments made by Beeks — and the judge’s unamused reactions.

HAPPENING NOW: Oath Keeper James BEEKS is appearing for a hearing and immedaitely objects to being represented by a lawyer, claims he’s there in his “divine” authority as an American citizen

Judge Howell is not pleased with his “gobbledygook.”https://t.co/WmeG04ars4

From the beginning, Beeks objected to being represented by an attorney, despite the presence of two court-appointed federal public defenders.

“I am an American standing under public law and I am here by special divine appearance,” he declared to Chief Judge Beryl Howell of the U.S. District Court in Washington, D.C.

Howell asked him if he was then representing himself, and he objected to that as well, saying, “I cannot represent myself because I am myself. I reserve all rights at all times and waive none, ever.”

“That’s all gobbledygook. I have no idea what you’re saying,” Howell snapped back at him. She brought up several affidavits Beeks had filed with the court that seemed to reject the court’s legal authority over him.

BEEKS nearly moonwalked himself into pretrial incarceration, but the Michael Jackson impersonator / Judas portrayer will instead be on home detention pending trials.

He just needs the FBI to return his car keys and “gold and silver.”https://t.co/WmeG04ars4

Assistant U.S. Attorney Jeffrey Nestler was “caught off guard,” wrote Cheney, as the prosecutor had originally not requested that Beeks be held in pretrial detention but now would request that since he was refusing to submit to court authority.

“A defendant who objects to jurisdiction of the court rejects being subject to the laws of the United States, who objects to the rule of law, is typically not released pretrial,” said Howell, clearly considering ordering him being held.

Michelle Peterson, one of the public defenders on the videoconference whose assistance Beeks had originally rejected, was able to communicate with him in a private side conference and convinced him to accept “strict terms of pretrial release that include GPS monitoring and a curfew,” reported Cheney.

And then the justice system hit another hurdle in dealing with this particular Florida Man: he was physically in Wisconsin and was required to return to his Gotha, Florida home in order to check in with the court there while he awaits trial. The FBI had taken his car keys when they arrested him, Beeks complained, along with cash and some “gold and silver” he claimed they had also seized.

Howell order the FBI to return the car keys to Beeks by noon so he could drive back to the Sunshine State. The fate of the “gold and silver” remains undetermined at this point.

Meanwhile, the show must go on, and the Jesus Christ Superstar tour is continuing on to Toronto, without Beeks, for their next month of performances to begin on Tuesday.