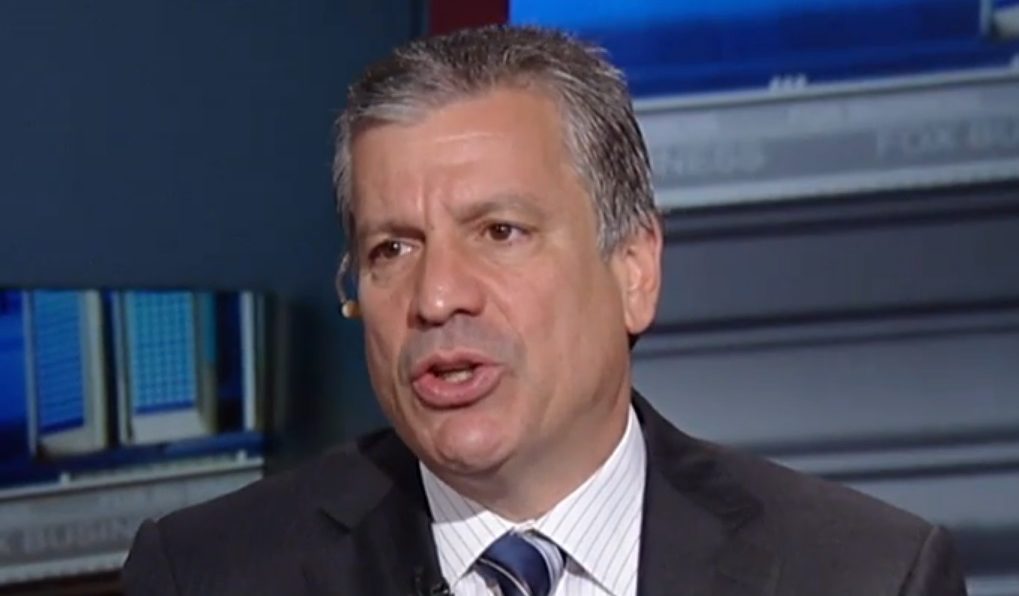 With scores of high-level contacts, Charles Gasparino of Fox Business is as dialed in as anyone when it comes to knowing what key investors are thinking. So what do they believe will happen at the ballot box this November?

Yes, according to Gasparino, the current read from Wall Street is that not only will President Donald Trump lose in the fall, but there will be a larger blue wave which will result in Democrats controlling both chambers of Congress, in addition to the White House. And amid fear about the impact of the coronavirus, another factor driving down the market is the increasing belief that Democrats will control the executive and legislative branches of the Federal government next January.

In an extended interview with Mediaite, Gasparino said that he spoke with a hedge fund manager whom he identified only as a “household name.” This person told Gasparino that investors are spooked that a blue wave would result in, among other things, a drastically increased corporate tax rate.

“Some of this fear [driving down the market] is that the Democrats are now going to sweep,” Gasparino said. “They’re going to keep the House, they’re going to take the Senate, and Trump’s going to lose.”

Of course, as Wall Street grows more certain about the outcome of the 2020 elections, it is far less certain about so many other factors relating to the economy. Gasparino spoke with Mediaite about the economic impact of the coronavirus, comparisons to the 2008 crash, and what investors are looking for from the president right now.

Mediaite: To what extent do you think average Americans should be living and dying with these crazy losses and gains in the Dow on a daily basis?

Charles Gasparino: Listen, this is not a good time to be in stocks. I’ve seen it before, in 2008. What makes this, in my view. more challenging is that [in 2008] you knew there was a policy prescription to get the banks out. You actually knew it, because they did it in the past. They would print money. They would do what’s known as QE. You would infuse the bank balance sheets with cash. You’d buy their assets off their balance sheet. And some of the assets that were on the balance sheet were kind of underwater bonds, mortgage-backed securities.

But you buy everything. And you kind of infuse the banks with a ton of cash, and you fixed the balance sheet. And you get through what’s known as a liquidity crisis. It was a global banking panic. But you kind of knew the problem.

We are now, from an economic standpoint, going to hit a liquidity crisis that the Fed doesn’t really know how to deal with. The liquidity crisis will be individuals, small businesses, and — to a large extent — states and cities. You look at the municipal bond market, they’re getting crushed because municipalities need to get over a hump. And they’re going to have the tax revenue to do that because people aren’t going out and consuming stuff.

And then there’s just individuals who work in these businesses who are not going to be able to have money to get through the month.

So you have this crisis that the government, generally on a large scale, is not set up to help. Yes, there’s a safety net. But it’s not set up to help. It’s not really set up to do the massive liquidity crisis intervention with these sort of problems on this level. And that’s what scares me. And I think that’s what’s scaring the markets right now.

How about a large scale stimulus? It seems like there’s a little momentum for that in Washington. Is getting cold, hard cash to people the way to go here?

Yeah, that would help a little bit. And it maybe it’s not a bad idea. Giving people money might work. But if people don’t go out and spend it, it’s not going to matter.

We need to give loans to small businesses and individuals that don’t have access to cash. There are people who need checks. And that’s where, in hard hit industries, or hard hit sectors of the economy — like restaurants and things of that nature — there needs to be one of these liquidity bail outs immediately. Or at least get the ball rolling. Because that’s where the economy can go down real hard, real fast.

In the restaurant industry, the service industry, some of these sectors that have been impacted, they seem very much like week-to-week operations. And the coronavirus is kind of exposing that a little. When we get past this, are these industries going to have to change their models to generate some capital reserves in the future? Are we going to be paying $100 for restaurant dinners so that small business can protect themselves from stuff like this in the future?

Great question. I don’t know if you can. When we get out of this, people’s behaviors are going to change.

Kevin Warsh wrote a great article in the in the Journal about these measures that you could you could take, what banks should be doing and what the federal government should be working with banks on.

It’s not going to this is not going to last forever. I mean, that’s the good part here. We’re going to get out of this in two months. It’s going to be different than it is now. Two months is not a lifetime.

It doesn’t make any sense for some guy to lose his life savings and business over a liquidity crisis. When, if you think about it, the risk can be mitigated by the federal government and the bank can take the risk, and make money off that risk as that business gets back online. That’s where the Fed can be the lender of last resort in a different way. But it has to refocus. The government has to refocus. It can’t do what it’s doing now.

To that end — and I’ll focus in on the president for now — what does the Street want to hear from Trump right now?

I think first and foremost, they want him to act like an adult. Now’s not the time to beat up on Jerome Powell. Or calling Joe Biden “sleepy Joe.” It’s stupid for him to say these childish things in such a serious time. They need to ratchet that down. I think he’s doing some of that. I saw the press conference [Monday]. He was much more mature.

And act like you’re taking the problem to heart. Talk to some really smart people. Kevin Warsh is a phone call away from Donald Trump. Trust me on this. Kevin almost became the Fed chairman. He knows the president. Talk to Jamie Dimon, who’s been through this. This isn’t his first rodeo. He knows how to keep a bank afloat amid carnage.

In 2008, the CEOs of the big banks — including Dimon — were essentially locked in a room at the Federal Reserve to try to solve the financial crisis. Is that something that might need to be done this time around?

I don’t know if you have to talk to all of them. But Jamie knows this stuff. And he’s the type of guy that can help. There are smart people out there.

What does the federal government do for small business. We have a Small Business Administration. But are they really ready to loan people tons of money to get through the next three months? You know, the only way to do that is maybe banks, with a backstop with the Fed. So you’ve got to redirect the Fed in so many ways to to deal with the problem.

After cutting interest rates to zero, though, what tools does the Fed have left?

The only tool that’s left is to protect the businesses that are gonna get crushed by people not consuming. And a lot of those, again, are not airlines. But how do you direct it to all these restaurants are closing, and flower shops that are closing? You know, think of any service. Landscapers, contractors. That’s the real economy.

Usually, the real economy, you can spur it through tax cuts and things like that. But not this time.

From a public health standpoint, what does Wall Street need to see to believe that we’re past the crisis?

I’ve been talking to a lot of smart guys that work at the banks, some hedge funds. And you know, every day, banks are trying to figure out infection rates, and stuff like that. Goldman Sachs actually had a conference call yesterday where they said they believe there could be a 50 percent infection rate. I think that’s what everyone is looking at. What is the infection rate?

And without that type of information. I don’t know how you buy stocks. I just don’t know.

You look at some of these blue chip companies at low prices, and they’re surely tempting for some people. But we’re living in a different world now.

And you know, I don’t want to make it like this is the reason for the selloff, but underlying a lot of this is investors saying, “Okay, Trump is toast. As crazy as he is, he didn’t raise our taxes.”

They’re looking at a lot of state races. Maine, Iowa, Arizona. If those states and a couple of others flip, you’ve got Democrats controlling the House, the Senate, and maybe the presidency. And investors are thinking, “Welcome to a 35 percent corporate tax rate.”

I can’t say the guy’s name, but I spoke to a hedge fund guy yesterday. Household name. And he says that [sentiment is] out there. Some of this fear [driving down the market] is that the Democrats are now going to sweep. They’re going to keep the House, they’re going to take the Senate, and Trump’s going to lose.

I think that leftward movement of the Democratic party — this is farther left than what Hillary Clinton ran on — I think some of that is starting to seep into the world as well.

When people watch you, and watch the network over these next days and weeks, what should they be looking for? What are you going to be zeroed in on?

Me, Neil [Cavuto], Liz [Claman] — I mainly do Neil and Liz’s shows — we call them as we see them. And I think the way we’ve been covering this, it’s going to be a lot less our opinion, and more about the information. We’re there to be a public service.

I get the emails from people saying, “You’re so negative. You’re trying to drive down the market.” I’m not. None of us are. It does me no good long-term to have an agenda for my career. I never did, and I never will.

I’m working from home, I’m going to set up Skype. But this is an investing public that’s hungry for information. So we’ll verify it. We won’t sugarcoat it.