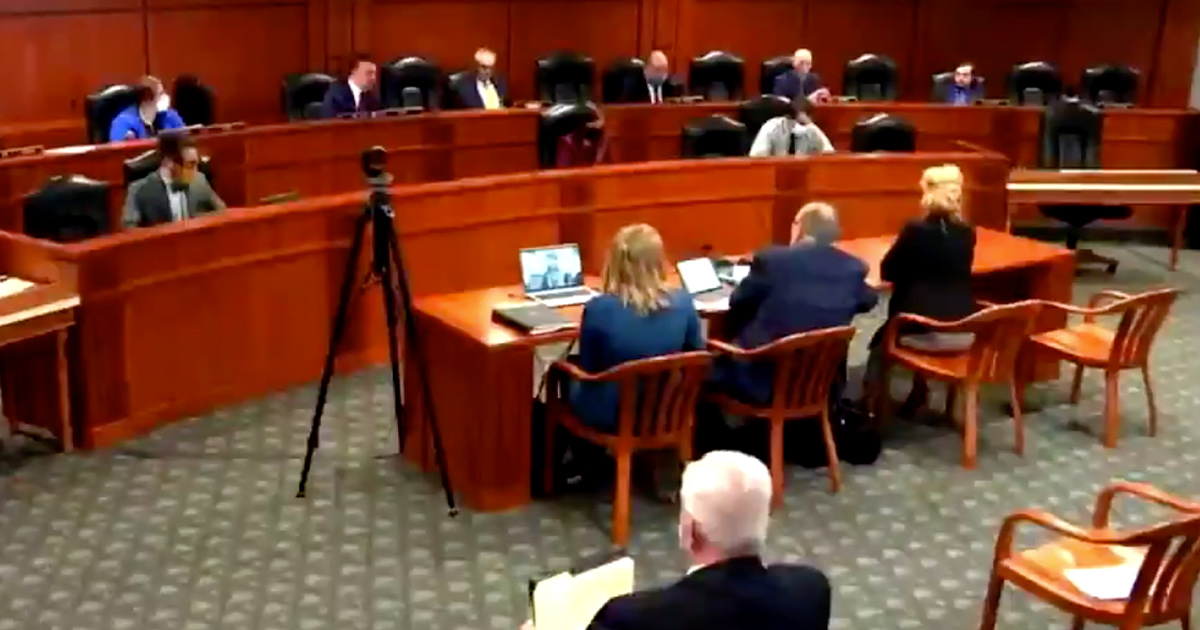 A Michigan hearing attended by the Trump legal team got a lot of attention on Wednesday for a rather wild back-and-forth between a Republican lawmaker and a witness making outlandish claims of voter fraud.

Melissa Carone, a contractor for Dominion, made claims of fraud that were already rejected by a Michigan judge. As Law & Crime reported just weeks ago:

The judge also laid waste to the internet rumor that the company Dominion Voting Services tried to rig the election for President-elect Joe Biden electronically, a baseless theory that entered into the court record via its contractor, Republican Melissa Carone.

“Ms. Carone’s description of the events at the TCF Center does not square with any of the other affidavits,” Judge Kenny found. “There are no other reports of lost data, or tabulating machines that jammed repeatedly every hour during the count. Neither Republican nor Democratic challengers nor city officials substantiate her version of events. The allegations simply are not credible.”

Michigan Republican state legislator Steve Johnson questioned Carone at the Wednesday hearing on her claim that the poll book “is completely off.”

In a very bizarre back-and-forth, she actually claimed it’s off “by over 100,000” and Johnson tried to ask a question as she continued barreling through with her fraud claim.

“What’d you guys do, take it and do something crazy to it?” Carone actually responded.

“I know what I saw, and I signed something saying that if I’m wrong, I can go to prison. Did you?” Carone retorted, and casually claimed that “dead people” and “illegals” voted.

Holy smokes the sequel is even better!

Rudy Giuliani tries to shush her to calm her down and the Republican even tries to reel her in!

She treats this Republican* like he’s a Chick-fil-A employee and the milkshake machine went down.

The moment immediately took off on social media, with Cecily Strong trending at one point as people noticed a similarity to a certain SNL bit:

Decided to mix in clips of the SNL “Girl You Wish You Hadn’t Started A Conversation With at a Party” character. It’s uncanny. https://t.co/A4pNFzaQZ1 pic.twitter.com/Al3s9JHfWb

Tell me this is not the next installment of this Weekend Update sketch, I will wait: https://t.co/4z899u0x5g https://t.co/SkTkwJm4yE

If I’m ever “Rudy Giuliani tries to reel me back in” crazy, I hope y’all will come take my phone and my car keys away. https://t.co/Cb3ndiK5Jm

This woman has definitely shouted, “No, YOU’RE the one who’s drunk!” at a store manager https://t.co/zosBo3Ordw

This is 100% Amy Poehler doing an old UCB character https://t.co/hlXMMTgAbG

at this point the only question is whether she’s going to be played by Kate McKinnon, Cecily Strong or Chloe Fineman https://t.co/nydZuPl6H6

You all knew that the Trump legal team’s secret weapon in Michigan was going to be a drunk woman yelling at a Republican who wouldn’t go along with her drunken ramblings.pic.twitter.com/7N2bXExvYF

this is the funniest SNL sketch i’ve ever seen pic.twitter.com/cnPztbMrBT

Here, sitting next to Rudy, is the Trump legal team’s star witness. https://t.co/o6D3DXvyWb