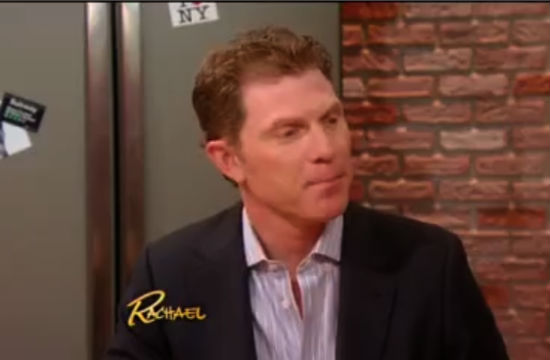 Bobby Flay co-hosted The Rachael Ray Show this morning (apparently a new part-time gig he has for all of Season 8), and during their mug-in-hand, butts-in-chairs opening segment, he chatted about his replacement-child restaurant Gato, which is meant to fill the Bolo-shaped hole in New Yorker’s hearts. Or something.

Rachael asked whether patrons of the new restaurant would be permitted to Instagram their meals if they so chose, because she finds the dining room camera phone ban to be fascist. Or something.

Explains Bobby, “I think a lot of chefs are taking offense that you’re coming into their restaurant, people are taking out their phones and their cameras, and taking pictures of it, they’re Instagramming it, they’re tweeting it, Facebook…”

“But why is that offensive?” Rachael interrupts. “It’s a compliment.”

Because multi-course cell phone flashes are bothersome to other diners and intrusive of their experience? Because flashes often wash out the plates and make the food look worse than it really is, in turn, making the chefs look bad? Because we’re citizens of the world and we should therefore have each other’s backs?

“Listen, if you want to come to my restaurant, where you’re paying for your meal, and you want to take a picture of my food and advertise it all over the world and the internet, be my guest,” Bobby responded.

We’ve all given up this fight, haven’t we?

RELATED:
Chef Advice: How To Take Photos In Restaurants Without Everyone Hating You
What Do Celebrity Chefs Think About Food Photography In Restaurants?