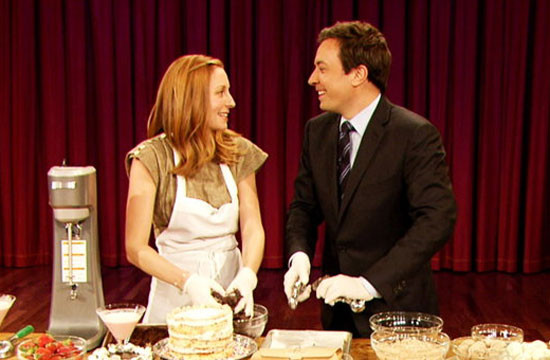 If the rumors are true, Jimmy Fallon will be taking over the legendary Tonight Show very shortly — that is, if NBC is finally able to pry Jay Leno’s cold, motor-oil stained hands off of the desk. Not only will this finally bring some comedy into the 11:30 time slot currently filled with snoozy Olds, it will also provide a huge boon to the culinary world: Jimmy Fallon is a notable gourmand, and has brought some of the country’s hottest and most relevant chefs onto his show.

The New York Post recently examined his rise (from awkwardly cracking up through entire SNL skits, to successfully hosting late-night TV) and noted that deep down, he’s still a goofball obsessed with good food and parties. One of the chefs who’s been on the show often remembered Jimmy’s reverence toward her from a time when being obsessed with chefs was hardly a Thing:

When Jimmy Fallon dined with his parents at Lower East Side restaurant wd-50 nearly a decade ago, he was treated like royalty by chef Wylie Dufresne and his staff.

“We were so excited to have him because he was on ‘SNL,’ and he was so excited to be there for this ultimate foodie experience,” recalls Christina Tosi, who worked at wd-50 as a pastry chef at the time.

“He wrote us the sweetest thank-you note. He said, ‘My parents were so impressed — it’s the nicest we’ve ever been treated at a restaurant.’”

And, of course, this is coming from Christina Tosi, the sweetest person in the history of people who make sweet things. But even she — Tosi, the person who did this — admits that Jimmy Fallon’s enthusiasm can eclipse even the people most thrilled to be with him.

“You think you’re going to be the most excited person there…But his excitement and enthusiasm almost supercede yours,” she told the Post about her last appearance on the show. “I think that’s what makes his show so appealing and so magnetic to everyone who watches it and is sort of addicted to it. You really feel like you get this honest, amazing piece of him. He really does just hand it out.”