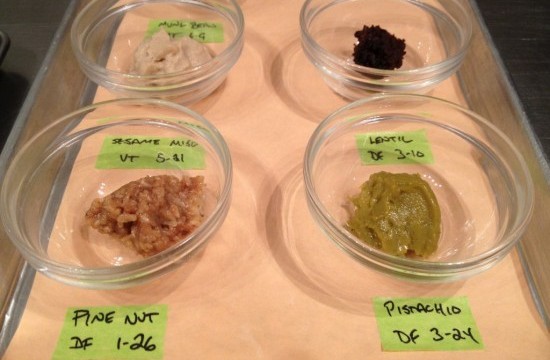 Imagine a world…where everything tastes like miso. Not miso as you know it, funky and salty with the distinct tang of soy, but a miso whose funkiness and saltiness also tastes strangely of pine nuts, or pistachios, or cranberry beans, or even corn — because the Momofuku R&D team just turned those foods into miso pastes.

The site Edible Geography chronicled the process behind David Chang’s misofication of foods, a technique he and his team have discovered (along with one Rachel Dutton, “microbiologist to the culinary stars”). After some tinkering by Dan Felder, head of Momofuku’s R&D, “the microbial metabolism at the heart of miso’s double fermentation process is now just another versatile piece of kitchen equipment, like a food processor or whisk.”

But why stop there? While Chang noted last week that he’d been interested in finding a way to capture the local terroir, we finally see how he wants to get that done: by finding a New York City-sourced replacement for aspergillus oryzae, the microbe responsible for turning soy beans (and every bean that David Chang can find) into delicious miso paste. To do this, the Momofuku people will be sending locally grown NYC rice (apparently sourced from a tiny field on Randall’s island) to Harvard for analysis.

Until they can get New York Miso (which hopefully won’t taste like homeless men and sooty pigeons — we trust you guys, you hear us?!), they’ve already used microbial preparations in their foods and you probably didn’t know about it before. For instance, that dry-aged beef you had at Momofuku Ko: rubbed with a mix of salt and fungus flakes. Don’t pull that face. You loved it before you knew it was full of spores.