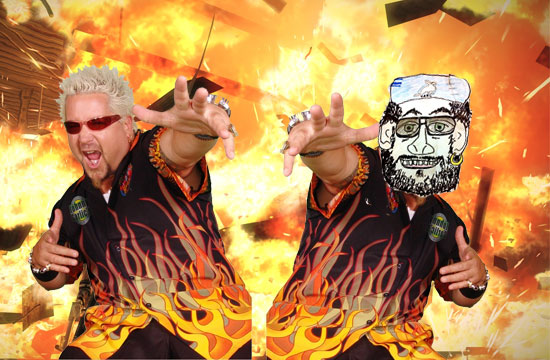 “Karl Welzein”, aka @DadBoner, knows what’s manly in this world, so lock it up, Men’s Health. He knows dudeliness so well that he wrote this action film script starring himself and the only other badass man in the restaurant world: Guy Fieri.

“It’s pretty much the film America’s been cravin’ for,” he writes in his pitch on Flint, MI’s Craigslist. “I’d also be willing to co-star in the film to keep costs low, (more $$$ for ya) and plus, when I put my mind to it, man, I get in some primo shape. But to be honest, the babes don’t really ever have any complaints about my bod. I haven’t rapped at Guy Fieri about the project yet, but pretty sure he’s down.”

Since we know that all the important people in the world read this blog — especially you, Guy Fieri! — here’s the very beginning of the opening scene, to get your interest piqued:

Night. A bar in the Flint area. (It also serves some of the best eats in the USA. Cheetos on anything for $1. Sammies are all piled high. The works, really. Full spread.) A kickass neon sign says, “Captain Karl’s Pizza Ship.” Van Halen is on stage rockin’ so hard. There’s chest beefers from coast to coast. It’s pretty much the biggest celebraish anyone’s ever seen. Guy Cooler (played by Guy Fieri) is hangin’ out behind the bar, peepin’ all the babes and makin’ sure everyone’s safe. The owner, Captain Karl, is doin’ a new dance that’s sweepin’ the nation called “The Peener” with 4-6 consensual babes, ripe with all the toppings. Drippin’ with sweat (the wet look) Karl decides to play the hot corner for a cold one, and calls Cooler over for a guy to Guy.

CAPTAIN KARL: Man, you sure cleaned things up around these parts, kimosabe. Captain Karl’s Pizza Ship used to be riddled with Oriental Mafia crime. Not anymore, now it’s a 24/7, 365, celebraish. Open on Sundays (winks).

GUY COOLER: Yeah, it’s so money. Thanks for lettin’ me kick things up in the kitchen on my time off for free.

CAPTAIN KARL: My pleasure. The menu is so on point. And such a great value for the large portions.

GUY COOLER: Yeah, but I gotta hand it to you, the “Cheetos on anything for an extra $1” idea is really off the chain. Adds such a great texture to any dish.

GUY COOLER and CAPTAIN KARL (together): Bold flavors. (They do a badass handshake from the streets. Some babes see it and give a carnal stare.)

At some point, though, Will Ferrell has to pop in as his Jamie Oliver character and challenge Guy Fieri to some sort of Talladega Nights-style challenge. (We know manliness, too.)