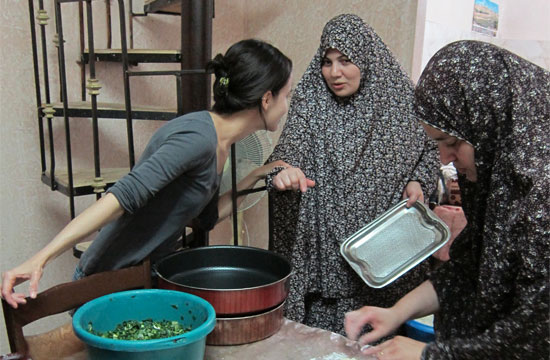 Sometimes, being a celebrity chef isn’t simply a matter of having a television show, an appearance at Fashion Week, or even your face on a line of canned soups. Sometimes — especially outside the Western world, where the concept of fame isn’t connected to cooking, for better or worse — being renowned as a chef is a matter of survival.

In their latest feature piece, Al-Jazeera follows the life of Islam, a Palestinian mother of six who operates a cooking school out of her home in Bethlehem, Israel, located in the Aida refugee camp. “Everyone in the camp knows Islam,” they write, “not just because she hails from a family of martyrs, but also because she is a bit of a celebrity chef.”

The school, which teaches groups of foreigners how to cook Palestinian food for 60 NIS ($15) per class, was Islam’s brainchild — but only after all her other options ran out. Not only did her husband lose his construction job (and the construction of the Bethlehem Wall prevented him from finding more lucrative work in Israel), her youngest son is severely mentally and physically handicapped. But after she met a social worker in the camp and began brainstorming ways to develop a steady stream of income, Islam began developing the Noor Aida — a cooking school run completely by the women of the camp.

The project started out with Islam and her sister-in-law Rania, a widow whose husband was killed by Israeli soldiers inside Islam’s own home. “At first the women were sceptical. They didn’t understand how people would pay to make their own food,” Sandra said. “They also felt that charging people for food would be against social norms in Palestine.”

But as customers came and went, the women in the camp grew more comfortable with the idea and started pooling the little money they received into a fund, which they used for a common goal. So far, they have used the money to secure clothes and diapers for an entire season; they also managed at one point to take a trip to a pool outside of the northern West Bank city of Nablus.

Her school is now renowned among tourists, and Islam hopes to soon be able to purchase a house. And unlike a majority of American kids who become chefs nowadays, Islam’s goal is to take care of her family — particularly her disabled son. “This whole thing started because I was ashamed by the fact that my boy wanted things that I couldn’t afford to buy for him, including basics such as diapers and medicine,” said Islam, now 32. “I was also sad because other camps like Dheisheh nearby had centres where disabled children could play. We don’t.”