Biden Our Time: People Are Asking Mitt Romney And Paul Ryan For The Wrong Math

Biden Our Time: People Are Asking Mitt Romney And Paul Ryan For The Wrong Math 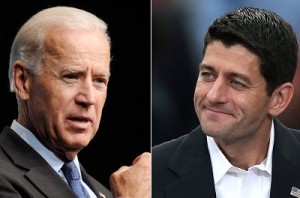 In the ongoing battle between the Republican presidential ticket and The Math, the mainstream media, debate moderators, fact-checkers, and even President Obama have been no match for the Jedi evasion skills of Mitt Romney and running mate Paul Ryan. That could all change Thursday night, as Vice President Joe Biden and ABC News’ Martha Raddatz have a chance to correct the course that The Math’s pursuers have unsuccessfully charted, and get some real answers from VP hopeful Paul Ryan about his ticket’s magical tax plan.

Things were already bad enough when we had one part of the mysterious equation, the $5 trillion that Romney’s 20% reduction in the income tax represents. Back in those days, all we had to worry about was asking how that cut would be offset, as Romney promises to do. Romney and Ryan would then avoid answering by either claiming it was too “wonky” or “baseline-y” or time consuming to explain, or by claiming that they couldn’t possibly name any deductions, because those would be the subject of negotiations, ad you never begin negotiations by knowing what you want to get from those negotiations. Fools.

At Wednesday night’s debate, however, even that bit of specificity was yanked out from under us by Mitt Romney, who now says there is no $5 trillion tax cut. That seems like a bad thing for fans of The Math, but it’s just the kind of reset this discussion needs. Since the media is so badly flummoxed by Romney’s insistence that he can’t name deductions and loopholes because “negotiations,” it’s time people stop asking that, and start asking the three simple questions I asked a Romney campaign advisor this weekend, questions that even the most casual observer of the Romney campaign ought to know the answer to.

Avik Roy is a health care advisor for the Mitt Romney campaign, and during his appearance on Up with Chris Hayes, I grew frustrated with the lack of questions related to specific Romney policies, and tweeted several of my own. Even though Mr. Roy made clear he was not authorized to speak for the campaign, he certainly is qualified to speak about the campaign’s policies, as a subject matter expert. We had a brief conversation, which these three questions ended:

1, “How many DOLLARS need to be offset for the proposed 20% rate cut to be revenue neutral?”

2. “How many of the DOLLARS needed to offset that 20% rate cut are from loopholes and deductions?”

3. “How many of the DOLLARS needed to offset that 20% rate cut are from growth?”

The answer to the first one is simple, but since Mitt Romney decided to throw it into doubt Wednesday night, it needs to be asked. When Romney claimed not to have a $5 trillion tax cut, he was either asserting that the 20% rate cute doesn’t add up to $5 trillion, or he was redefining the term “tax cut” to mean the proposed net effect of any set of legislative measures (so TARP would become the “zero dollar bailout,” since it’s all supposed to be repaid). Maybe he doesn’t know what a 20% rate cut adds up to.

That second question is the one that gets around the Romney/Ryan reluctance to name specific deductions and loopholes that they’d eliminate. Whatever those end up being, they’re going to have to add up to a certain dollar figure in order to offset the cuts from the first question.

Subtract the deductions and loopholes from the amount of the tax cut, and you get the answer to question number three, which is where, I suspect, the real secret to the Romney/Ryan plan resides. Mitt Romney knows very well that his chances of getting any meaningful deductions and loopholes past either side in Congress is zilch, but that really doesn’t matter, because he and Ryan believe the tax cut will pay for itself. They just don’t want to say it out loud, because like the Truther dude at a party, as soon as people hear it, they’ll recoil.

Or maybe not, maybe Mitt Romney and Paul Ryan have a plan that they’ve been hiding for so long because, as the President put it, it’s too good. Maybe they fear some sort of Hard Day’s Night-type reprisals from throngs of screaming, adoring middle-classers, and want to make sure they’ve got that Secret Service protection in place before they reveal it all.

If Martha Raddatz or Vice President Biden can pin Ryan down with these questions Thursday night, the rest of the “specifics” will be moot, like asking an alchemist for his shopping list. Romney says “The devil’s in the details; the angel is in the policy,” but if Paul Ryan is pressed on Thursday night, the Armageddon will be in The Math.