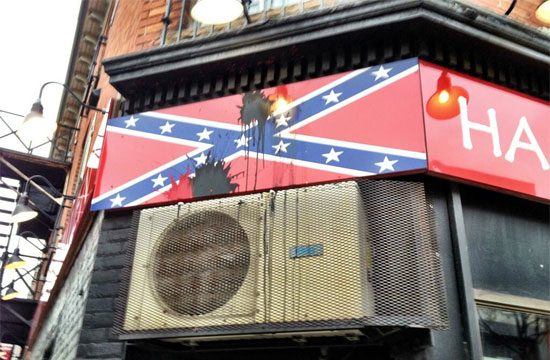 Eater: It starts off a fairly normal news story: a barbecue shack puts a Confederate flag above its door, which becomes the subject of protest. Flag gets vandalized, the totally “not racist” owner rails against “media people, academics or hipsters,” everyone gets into Serious Conversations About Race. And then, a twist: this is all taking place in…Canada.

Huffington Post: Remember how the only East Coast version of Nancy Silverton’s famed restaurant Mozza will be housed inside an airport terminal at JFK? Want to hear an even crueler joke? It’s not going to be Mozza, but two of her La Brea bakeries joined by a Marcus Samuelsson concept, an airport version of The Palm, a sushi bar, a French bistro, Danny Meyer’s Blue Smoke and Shake Shack. The bad news? You’ll have to fly Delta to get a taste of any of it.

ABC: Apparently, Rachael Ray is a cool cat. She’s such a hep kitty, that she and her husband fly down with the other cool daddy-os to South By Southwest every year, and make these dee-lish Tex-Mex burgers for everyone who comes to the Ray jamborees. What a cool cat, that Rachael Ray is.

Tasted: Behold, Richard Blais doing sacrilegious things to a patty melt for St. Patrick’s Day! Can you believe that in one video, he manages to desecrate burgers, the Catholic Church, and unicorns? If only Blais were a snake, so St. Patrick could drive him out of our burgers.

Providence Journal: Bumble Bee Tuna recalls some of its tuna cans on the grounds that some may have been sealed improperly, possibly leading to spoilage. So stop dropping screws in the tuna, frivolous lawsuit seekers — it won’t work!

Grand Forks Herald: Sweet little old lady Marilyn Hagerty revisits The Olive Garden, and finds that the food is the same, the restaurant is still loud, and that it’s really quite odd to be an internet celebrity: “I went viral” she wrote after the initial review, “and I didn’t even know what that meant.” Aw, olds! So un-internet.