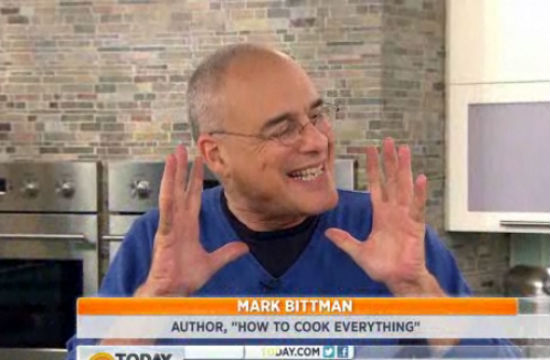 It’s possible that some of us at The Braiser love pumpkin pie made from real pumpkins more than we love our parents. It’s possible that we love pumpkin pie so much, we basically only look forward to Thanksgiving as an excuse to eat pie for breakfast on the grounds that it’s seasonal, and essentially the same thing as eating a muffin for breakfast, except instead of a muffin, it’s a cupcake, and instead of a cupcake, it’s pie.

It has come to our attention that one of our favorite food writers, Mark Bittman, and one of our favorite morning show anchors, Matt Lauer both hate pumpkin pie. We’re going to deal with our many, many feelings about that later (and over pie), because for now, we’re too busy being impressed with Mark’s ability to bake one almost in real time on The Today Show this morning. And by “in real time” we mean, in a four minute cooking demo segment.

Twice, he asks how much time he has left, and both times occur before the halfway point. How? How does he demonstrate the roasting, peeling, dumping, stirring, crust-forming, pouring, and baking process, plus a bonus dish in four minutes? And how does he do it as a hater of the very pie he has come to bake? We don’t understand. Is he some sort of superhero or is he a super villain?

Check out the clip below and decide for yourselves.