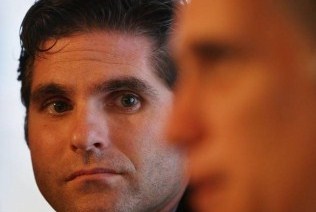 Tagg Romney made nationwide headlines and raised eyebrows when he joked he wanted to “rush down to the debate stage and take a swing at” President Barack Obama during the second presidential debate. Some found the comment offensive and inappropriate, but the Romney son reportedly apologized to the nation’s leader for the jab earlier this week.

Tagg and the president reportedly crossed paths at Lynn University Monday night after the final presidential debate took place. According to CNN, Tagg used the encounter as an opportunity to say sorry for his insinuation of violence. The “take a swing” comment even made the cut for last weekend’s installment of Saturday Night Live, which parodied the heated second debate and included Tagg’s character stepping up in the audience to say, “Let me at him, dad!” You can watch Tagg’s impersonation in the clip below at about 3:54:

It all started last week when Tagg appeared on a North Carolina radio station and was asked how it felt to hear Obama call his father a liar. Tagg said of how he’d wanted to react to the debate:

“You want to jump out of your seat, and you wanna rush down to the debate stage and take a swing at him, but you know you can’t do that, because, well, first because there’s a lot of Secret Service between you and him, but also because this is just the nature of the process.”

After news surfaced of Tagg’s interview, Lawrence O’Donnell put on a South Boston accent and jokingly challenged him to a fight during an episode of his program:

”I’ve been sayin’ all year that ya father lies, and has been trying to lie his way into the White House. So, you wanna to take a swing at someone for calling your dad a liar? C’mon. C’mon. Take a swing at me, and don’t worry, there won’t be any Secret Service involved. Just us. And I’ll make it easy for you. I’ll come to you anytime, anywhere. Go ahead, Taggart, take your best shot.”