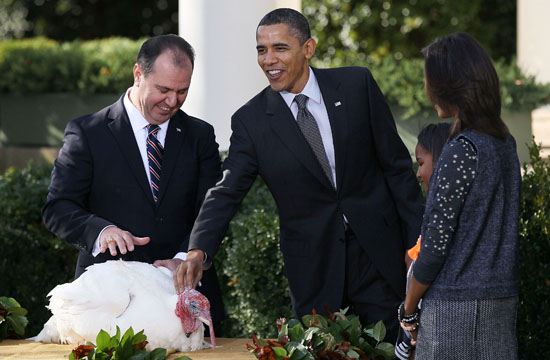 According to this perfect headline from the US News and World Report, “All Of President Obama’s Pardoned Turkeys Are Dead”. That’s right. Along with everything else he can’t do (like, say, build a freaking website), President Barack Hussein Obama II is incapable of granting longevity to an obese turkey.

If you’re not aware of the fluffiest Presidential tradition, here’s a rundown: since the Eisenhower administration, every year around Thanksgiving, the President of the United States uses his constitutional pardoning powers to grant a reprieve to two turkeys destined for the oven. This tradition involves a grand ceremony, Ming Tsai making jokes about eating them, and a quiet retirement on a luxurious farm in Virginia.

But ever since Obama took office in 2009, none of his pardoned turkeys have lived past two years, and many usually die in less than a year:

Gobbler and Cobbler – last year’s set of turkeys who attended the annual Presidential Turkey Pardon – have both died, Whispers has learned. Gobbler, Cobbler’s understudy, died in February. “Gobbler passed away suddenly. It was very quick. We don’t know what the illness was,” Rebecca Aloisi, vice president for marketing at Mount Vernon, where the turkeys went after their 15 minutes of fame at the official ceremony in 2012, told Whispers back in April.

Cobbler, 2012’s official pardoned turkey, lived through the summer and was euthanized on Aug. 22.

Liberty, a turkey from 2011, had the longest lifespan of the crop, living to the ripe old age of 2, before being euthanized on April 26, due to heart failure. All three turkeys were meant for consumption before they were spared, and thus cursed with a bevvy of health problems related to obesity.

No, seriously, obesity is the reason they die so early: an average farm-raised turkey, bred for the Thanksgiving table, can weigh up to 45lbs, whereas their wild counterparts weigh 18lbs on average and can live up to 12 years in the wild. One can easily assume that obese turkeys share the same problems as obese people, and guess what? They do: joint problems, heart attacks, and organ failure are the most common causes of death for the average pardoned turkey.

Also, did you know that due to selective breeding, commercial turkeys are so fat and big-breasted that they’re physically incapable of having sex and reproducing? Did you know that this is why turkey farms hire people to manually inseminate every single female turkey in America? Is this not one of the more terrible jobs that exists in the world?

[US News and World Report]