WATCH: Anthony Bourdain May Have Been Totally Stoned Out Of His Gourd In Morocco 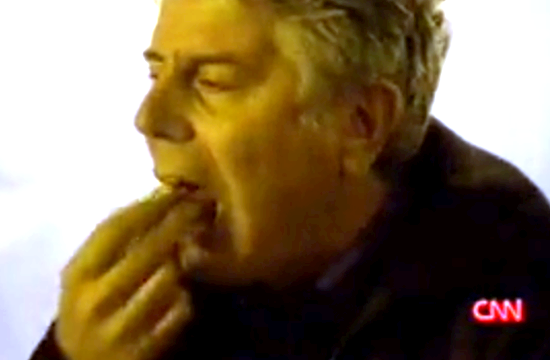 Oh boy, here’s one for the moral concern trolls at Fox News: on last night’s episode of Parts Unknown, not only did Anthony Bourdain talk about conspicuous amounts of hashish (aka “reefer”, aka “weed”, aka “the dope”) while traveling through Morocco, he also heavily implies in one segment of the show that he is totally, completely, utterly baked. On CNN!

First, in a sequence straight out of a Breaking Bad cook scene, he watches two anonymous, animal-headed confederates make majune, a local confection of honey, chocolate, nuts, and a generous amount of processed marijuana. Afterwards, he meets up with two local scholars in a Tangier cafe that seriously smelled like his college dorm room: “I have no direct knowledge of either [of my companions] smoking any illicit substances, nor do I have any recollection of me doing anything untoward in their presence,” he innocently claims in a voiceover. “That would be, like, wrong, dude. Others in the room, however — well, don’t give me that innocent look, you young punks. I know somebody in here is smoking reefer.”

Of course, thanks to CNN’s standards and practices, Bourdain has to deny, Clinton-style, that any sort of ingestion of banned substances took place. That doesn’t stop him from admitting to one major contact high, which he faces down with a potato omelet that we sort of want to make right now. As we write this, it’s 4:00 AM and we’re getting ready to interview Thomas Keller. Seriously, that’s not a new euphemism for “taking a massive bong rip.”

Save us from ourselves and just watch the clip already: