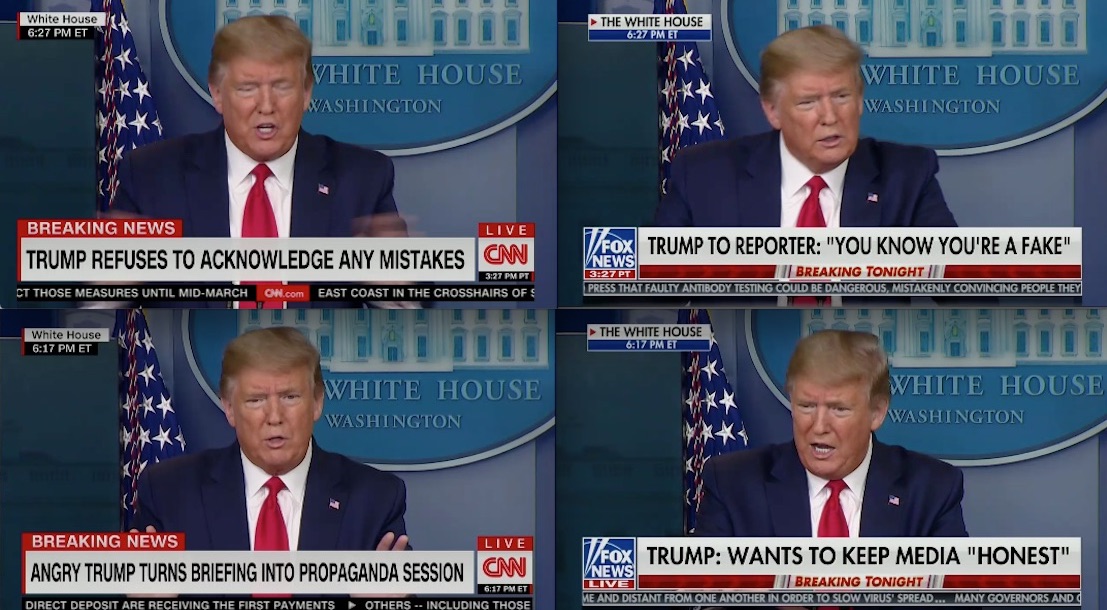 It’s often said that Fox News and CNN almost report as if from alternate universes. But rarely has a moment so starkly underlined this dichotomy than President Donald Trump’s bizarre coronavirus press briefing did on Monday, when those network’s dueling chyrons presented viewers with a real-time black-vs.-white, up-vs.-down narrative on the president’s behavior and rhetoric.

The different framing began right from the start. At 6:01pm EDT, right as the briefing got underway, CNN’s chyron called out the numerous reports and critiques of the administration not seeing warning about the Covid-19 threat, while Fox News’ lower third chose to highlight Trump’s defense to their “reaction.”

CNN stuck with that chyron for nearly 15 minutes, all throughout the president’s bizarre, campaign-style video attack on the press for allegedly minimizing the risk of coronavirus — a claim that has been repeatedly lodged against his own administration’s response. Fox News, meanwhile, fired up its chyron engines and began cranking out Trump-friendly frames at a pace of one every minute or so. 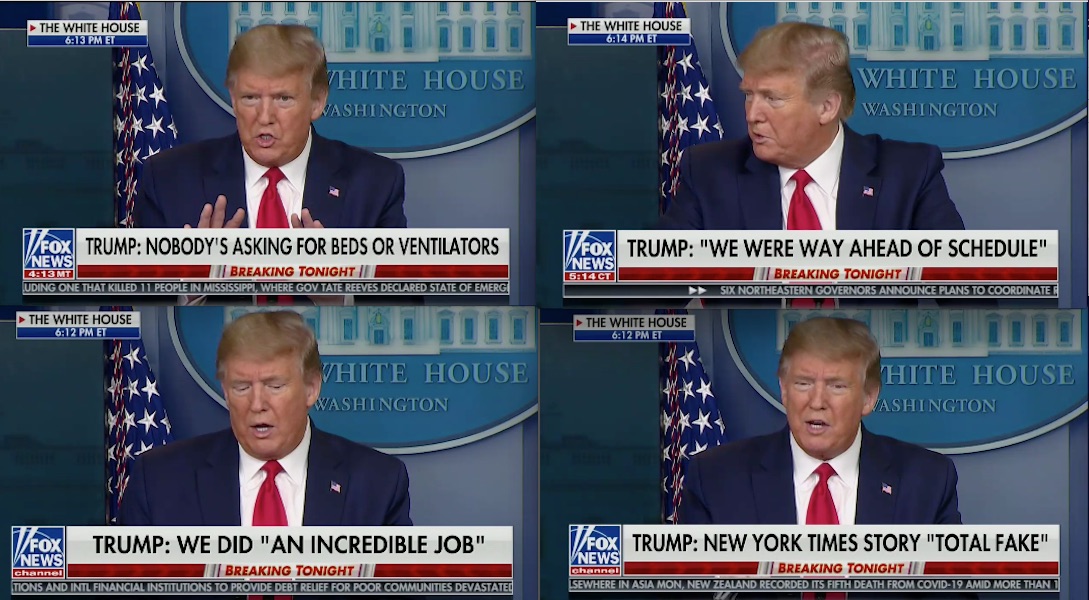 By 6:16pm EDT, CNN had absorbed Trump’s media attack and began pushing back on its screen contemporaneously, calling out the president for using that evening’s briefing trying to “rewrite history” on its performance. Fox News, on the other hand, credited Trump with wanting to “correct ‘fake news.'”

One minute later, CNN was labeling the White House briefing a “propaganda session,” while Fox had shifted its language to repeat the same message about Trump wanting to “keep the media ‘honest.'”

Nearly a half-hour into the briefing, at 6:27pm EDT, the Q & A portion was underway and CNN was highlighting the notable absences in Trump’s answers while Fox News was quoting his insults at CBS News reporter Paula Reid, who challenged him on what the federal government did in February to prevent the spread of the virus.

Nearly 10 minutes later, CNN chyrons continued to offer that network’s big-picture takeaway from the briefing, while Fox News was highlighting the granular details Trump was touting.

CNN’s lower third at 6:40pm EDT was a devastating assessment of a president defensively firing back at damning criticism. One minute earlier, Fox News’ was giving its audience yet another, more optimistic, forward-looking quote from Trump.

Ten minutes later, CNN continues its fact-checking of Trump’s hit on the president and invited viewers to go online to see for themselves. A weirdly, out-of-context quote from Trump, who was talking about his expected quick rebound from the current economic crisis, was Fox News’ choice.

As the first hour of the briefing wrapped up, CNN hit Trump for using taxpayer dollars to produce an anti-media, pro-Trump highlight reel for what is ostensibly a public health information session. Fox News, continuing its theme of quoting Trump, repeated his claim that he has “total authority” to reopen the country’s economy.

But as the hour rolled over past 7:00pm EDT, something changed. Fox News, apparently giving its chyron writers a rest, landed on the anodyne “White House Holds COVID-19 Task Force Briefing” for its chyron choice and unswervingly stuck with it until the end of the briefing. CNN, by contrast, kept recycling its critical-of-Trump chyrons from the past hour.

All in all, it was an incredible hour of subtextual messaging from these competing networks. One intent on calling out the president and contextualizing his comments, the other adamantly repeated his framing, at times almost word for word.