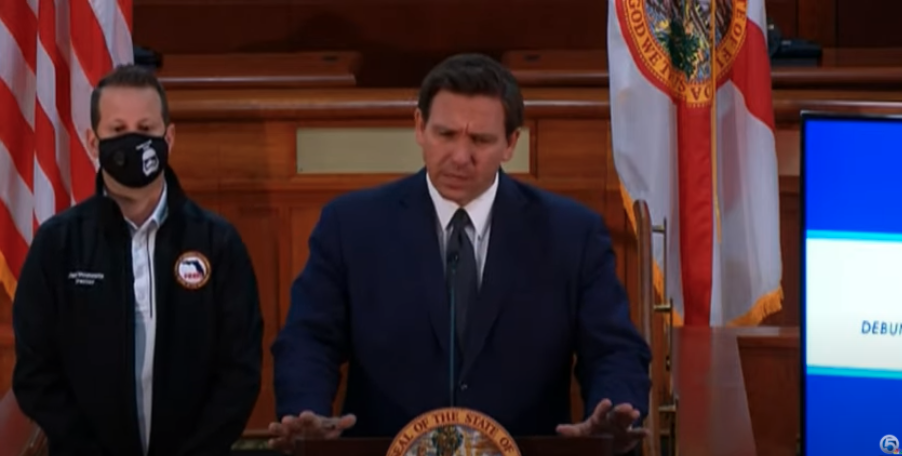 In a press conference Wednesday, DeSantis referred multiple times to a 60 Minutes report that linked DeSantis’ decision to offer vaccines through Publix grocery stores to campaign donations Publix, and members of the family that own the chain, to DeSantis.

DeSantis has denied any such connection, and has also accused CBS and 60 Minutes of a deliberate, malicious attempt to damage his reputation.

“So the big lie, of course, which has been debunked by 100% of the people that have any knowledge on this, is that there was some type of conspiracy between Publix, which is our probably most respected company in the state, and me for some type of vaccine distribution,” DeSantis said at a press conference Wednesday, just one day after another press conference in which he promised he wouldn’t let up on CBS for the report. “That’s been debunked, it is wrong.”

The phrase “big lie,” of course, has been frequently used in recent months to describe the false claims repeatedly pushed by former President Donald Trump and a number of Republican allies.

DeSantis also criticized “corporate media,” promising that “if they’re going to come down here and smear our efforts, or smear me, or smear great companies in my state, I’m going to hit them back right between the eyes.”

CBS has stood by the report, saying that 60 Minutes edited part of DeSantis’ response for clarity, and that the story “speaks for itself.”