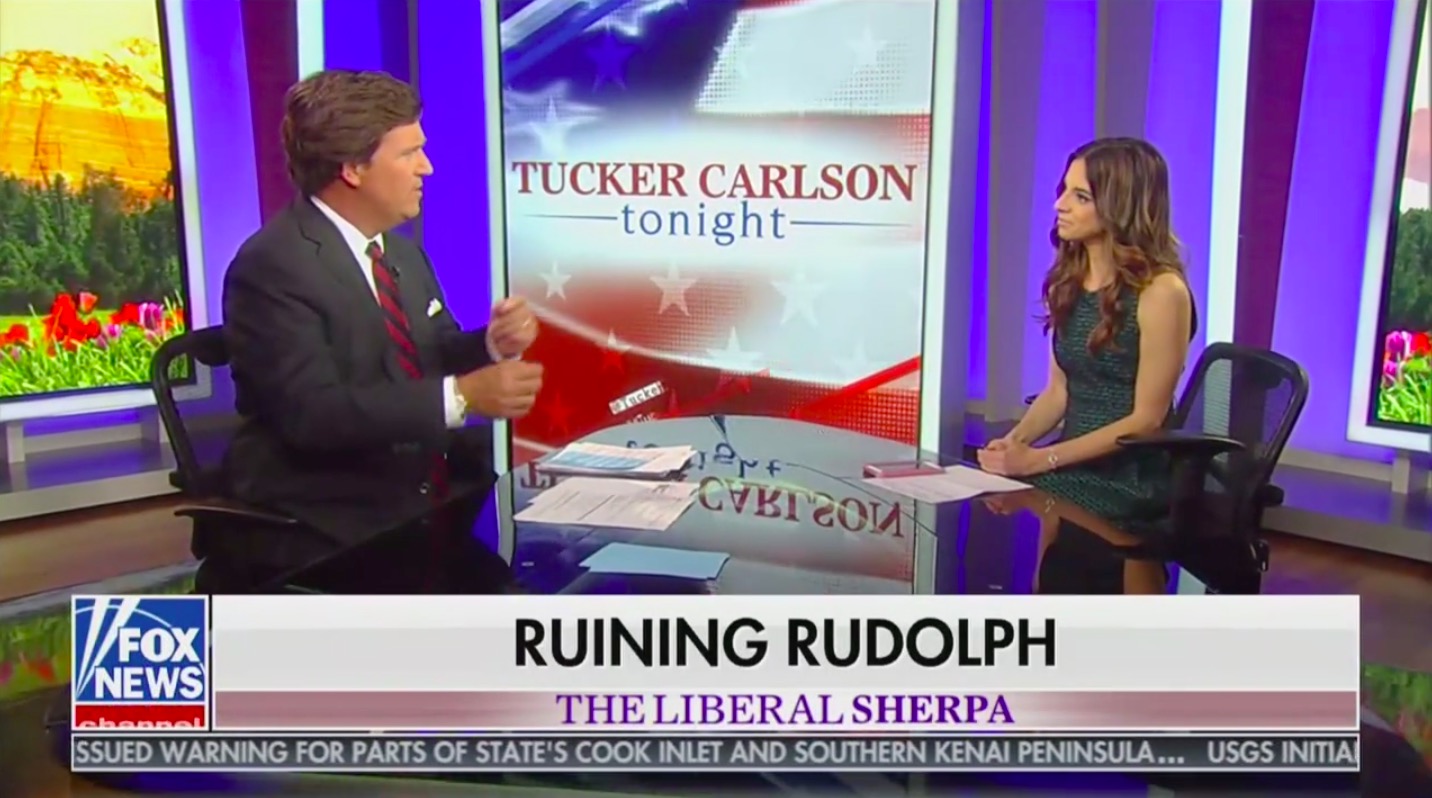 Inconsistencies are emerging in claims made by Cathy Areu, a once-periodic Fox News guest, that she was harassed by some of the network’s biggest names — including prime time anchor Tucker Carlson and Sean Hannity. New emails obtained by Mediaite shed further light on the case.

In a lawsuit filed on Monday in the Southern District of New York, Areu claims she was harassed by Carlson, Hannity and other employees of the network, and that she was largely barred from appearing after she declined their advances. In an initial response the company said the claims were “completely false.”

Over the last several days, records of Areu’s appearances on the network and other publicly available information has undermined some of her claims. New emails between Areu and the network’s employees seem to add to those concerns.

Even more significantly, eyewitness accounts indicate Carlson’s wife was with him on a key evening when Areu said Carlson promised her he would be alone.

In the lawsuit, Areu claims, she was a “relatively regular” guest on Hannity’s prime-time show until March 8, 2018. “On that day, Mr. Hannity, on set and in front of the entire studio crew – and completely unsolicited – threw $100 on the set desk,” the suit claimed. “He then began calling out to the men in the room and demanding that someone take Ms. Areu out on a date for drinks at Del Friscos. He repeatedly yelled, ‘who wants to take her on a date?’ ‘Take her on a date to Del Friscos.’”

Areu “was completely mortified,” the lawsuit added, “and made clear that she was incredibly uncomfortable with Mr. Hannity’s misogynistic behavior by quietly pleading with one of her friends in the room to accept the money so that the humiliation would end. Thankfully, none of the staff cooperated with Mr. Hannity, even after he repeatedly chided one particular male employee for being ‘afraid to take out a beautiful woman.'”

Emails provided by Fox News and reviewed by Mediaite, appear to show that the male friend Areu referenced actually came to the set that evening at Areu’s invitation.

“Is it ok for me to bring a guest?” Areu apparently wrote in an email to a staffer earlier that day, referring to the guest as “Alex.” She added, “He’s my good luck charm. He does yoga. Very calming. I run. I’m nuts,” before signing the email with a winking face and her name.

The staffer replied: “Haha of course! No problem at all – will add him to the security list,” signing the email with a smiling face.

According to Fox News, which hired an outside firm to investigate Areu’s allegations, Hannity offered Areu and her friend $100 to get drinks next door at Del Friscos after the appearance.

Areu then apparently sent two emails thanking Hannity and his staff. The first, at 10:37 in the evening, said: “Thanks so much for having me on. Way too much fun.”

The second, sent at 6:39 the next morning, included a picture of the martini she said she bought at Del Frisco’s. “Please thank Sean for a fun evening,” Areu wrote. “He shouldn’t have! … but We did exactly as he and Alex’s had bet. Down to the pineapple martini.” 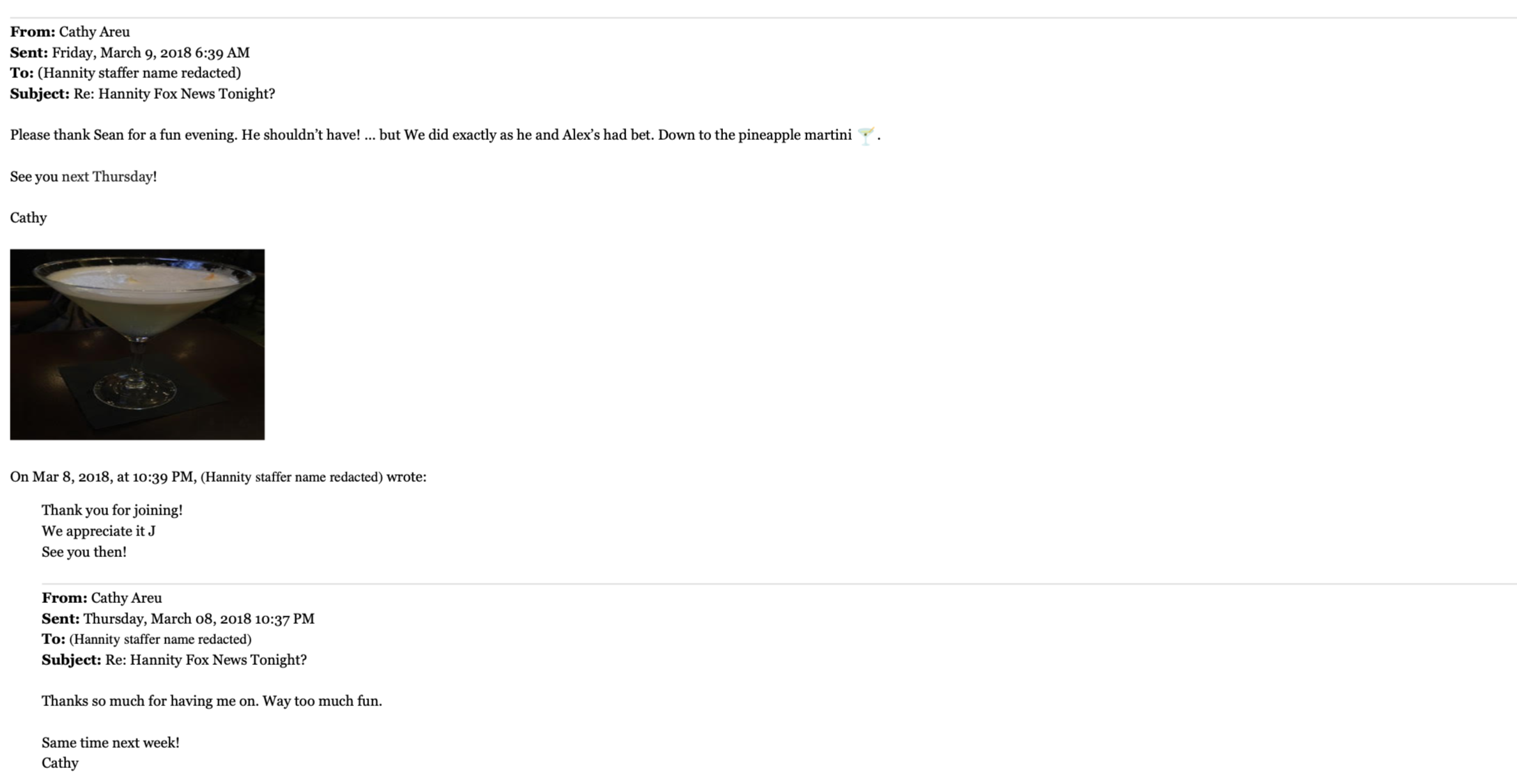 Areu’s lawsuit claimed that she believes the incident resulted in her being barred from future appearances: “After this incident, and Ms. Areu’s failure to ‘play along,’ Ms. Areu was hardly ever, if ever at all, invited back to appear on ‘Hannity’ on Fox News Channel.”

According to Fox News, its records indicate Areu appeared on Hannity a total of nine times between the date of the alleged incident, March 8, 2018, and July 3, 2019. Of that number, Fox said, five appearances took place in the four months directly after the incident. A search by Mediaite confirmed that Areu appeared repeatedly on the show following the alleged incident, both with Hannity and with guest hosts.

The network claimed that on one of those subsequent appearances, Areu thanked Hannity again for the drinks, and he again gave her and the same friend money for another round of drinks.

Additional inconsistencies involve Areu’s claim that she was harassed during her “final 2018 appearance” on Carlson’s program. “Following the show, Mr. Carlson changed on set into his leather jacket for the annual Christmas party that he told Ms. Areu he would only be attending for approximately 10 minutes,” the suit stated.

Reporters including The Spectator’s Amber Athey quickly noted Areu’s final 2018 appearance with Carlson took place on November 30 of that year, while the network’s annual Christmas party took place on December 10. Areu did not appear on the December 10 episode of Tucker Carlson Tonight. Additionally, she appeared on a December 28 edition of the program, guest-hosted that night by Mark Steyn.

While that final interview was archived on film website IMDB, an attorney for Areu, Michael Willemin, told Mediaite his client had no recollection of it. He also said the Christmas party Areu was referencing must have been a smaller holiday event held for Carlson’s staff rather than the company-wide event.

“The incident with Tucker Carlson actually occurred on Nov. 30, not Dec. 10,” Willemin said. “Ms. Areu misrecollected that the incident occurred in December because it occurred following a winter/Christmas segment. It is entirely possible that she appeared on Dec. 28, although she doesn’t have a specific recollection of that and if she did appear, it was not in Mr. Carlson’s physical presence.”

That claim leads to another issue. “Following the show,” Areu asserts in her lawsuit, “Mr. Carlson, hardly making any effort to hide his intentions, began telling Ms. Areu that he would be alone in New York City that night, and specifically said that he would be staying alone in his hotel room without any wife or kids.”

“She didn’t go to the party so she can’t say who was there, but certainly stands by what he told her,” Areu’s attorney said.

Areu’s claim that she was harassed by Carlson also relies on insight into the Fox News host’s frame of mind: “Without question, Mr. Carlson was probing to see whether Ms. Areu was interested in a sexual relationship,” the suit said. Areu’s public comments about Carlson since the alleged incident have also been warm. In one 2019 post on Twitter, Areu wrote that Carlson “has always been polite to me.”

“Ms. Areu awkwardly sidestepped Mr. Carlson’s advances and declined to spend the night at his hotel,” the lawsuit continued. “Mr. Carlson promptly retaliated against Ms. Areu, who was featured on his show only three times in 2019 and has not appeared once in 2020.”

Fox told Mediaite that company records indicate Areu appeared on Carlson’s show four times in the four months following the incident, the same number of times she appeared on the show in the four months preceding it. “There is zero evidence of retaliation,” the network claimed. The network also said there were eyewitnesses to Carlson and Areu’s conversation who would contradict her account.

Areu’s lawsuit named several individuals in addition to Hannity and Carlson: MediaBuzz anchor Howard Kurtz; Fox analyst Gianno Caldwell; and former daytime anchor Ed Henry, whom the network fired on July 1 over a sexual misconduct allegation made by another woman.

According to the suit, after seeing a picture of Caldwell with Ann Coulter, Areu requested Caldwell introduce them — only to receive an invitation from Caldwell to have lunch. She said she ignored the message, following up with another request for an introduction. Caldwell responded, she says, by telling her to buy him lunch, what she described as setting a “price to meet Ms. Coulter.”

Fox said in a statement Areu had asked Caldwell “many times for advice on how to obtain a contract like Caldwell’s with Fox News” and that he had assisted her “as a professional courtesy.” The network also quoted texts to Mediaite where Areu allegedly continued texting after Caldwell declined her “aggressive” attempts to obtain Coulter’s contact information, eventually following up in a message to Caldwell, “I am [sic] meet her another way. Or not. It’s all good.”

Finally, Areu said she sought to meet Kurtz to talk about strategies for winning full-time employment at Fox News, and that Kurtz — who lives in Washington, D.C. — offered to meet Areu in his hotel lobby on a day he was in New York City, texting: “I’m just at my hotel making calls. Can you come to the Muse lobby at 7:15?”

Areu said she refused, and countered with a request for Kurtz to have dinner with Areu and her friend. Kurtz declined, and made a further comment that led her to presume he was seeking to meet “only if she were alone and at his hotel for sexual reasons.”

Kurtz, according to Areu’s lawsuit, said “in sum and substance” that she was “the only woman here who won’t come to my hotel room.”

Fox said Kurtz made his availability clear, telling her in an email before the text exchange, “I may just have a little time to chat in the hotel lobby.” When Kurtz declined to attend a dinner with Areu and her friend, Fox said, Areu became particularly aggressive, writing by text message: “What? I’ll be right there. I’m totally available right now!!!!!!” The company said she followed up by emailing Kurtz: “What’s your room number? What name are you under? What’s your cell? I’m coming over. We can do it the easy way, or the hard way.” Kurtz did not reply to those messages.

The issues with Areu’s claims may be a disservice to Areu’s co-plaintiff, Jennifer Eckhart, a former producer who alleges, among other things, that she was violently raped by Ed Henry. Eckhart included in the suit graphic and abusive text messages she apparently received from Henry, who has been fired from the network. Areu also claimed to have received inappropriate texts from the former Fox News anchor. Henry, in a statement issued by his lawyer, claimed his relationship with Eckhart was consensual.

Fox declined to address either woman’s allegations against Henry, and did not specifically challenge those claims in their statements responding to the lawsuit.

The concerns about Areu’s allegations do not necessarily disprove her case, but in a court of law, they could certainly make it far more difficult for her to win.

“When the plaintiff’s allegations can be easily refuted by dates or other facts, those allegations lose credibility,” said David Warrington, a litigator at Kutak Rock in Washington, D.C. “That loss of credibility can have a cumulative effect.”