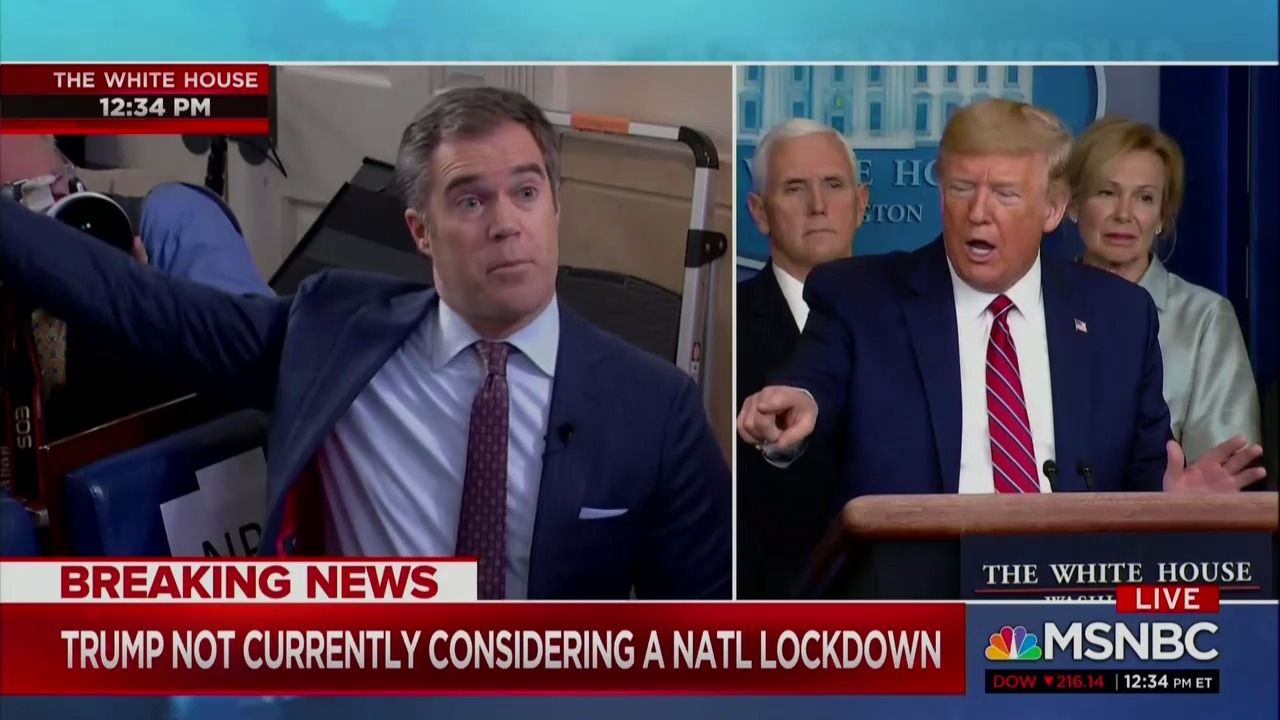 NBC White House correspondent Peter Alexander garnered unwavering and robust support from colleagues Friday on Twitter after President Donald Trump blasted him as a “terrible reporter,” which began when Alexander — who viewed his question as a “softball” — asked about Trump’s message to Americans during the coronavirus outbreak.

White House correspondents such as ABC News’ Jonathan Karl to CNN’s’ Jim Acosta and many more praised Alexander’s line of question and called him a “first-rate journalist” — which, they said, he demonstrated Friday inside the White House briefing room:

Let’s be clear: @PeterAlexander is a first-rate journalist and a stand-up guy. It’s outrageous to use the presidential bully pulpit to bully a journalist like Peter — especially at a time like this.

“I would say do not be afraid, be vigilant,” @VP Pence says, when @PeterAlexander asks him the same question: What would you say to Americans who are scared. That seems pretty simple.

Talk about esprit de corps. Excellent question @PeterAlexander – should have been a layup for the president to make Americans feel better. Good for @CeciliaVega for keeping it going AND not letting POTUS off the hook – & @kaitlancollins for calling him out.

“I say that you’re a terrible reporter,” the president says to @PeterAlexander who asks this very fair question – what is the presidents message to Americans who are scared.

Trump attacks @PeterAlexander during the #coronavirus press conference. Then says, “This is time to come together.” He adds, “When people are dishonest, they truly hurt our country.”

Alexander is a solid reporter, and Trump doesn’t mention this:https://t.co/bvEvjTxHTf

Right now is not the time to attack the press. So many journalists (especially photographers and videographers) are putting their health at risk to cover the pandemic around the clock.

And that was not a nasty question, @PeterAlexander.

Asked to perform one of the key duties of the presidency — to reassure the American public during a crisis — Trump instead attacked @PeterAlexander, the v good reporter who asked the (fairly softball) question…

Peter Alexander: What do you say to millions of Americans who are scared right now?

(@PeterAlexander is a great reporter)

Would love to know what is going through the mind of Dr. Fauci – who has interacted with the media so often in his long career – as he stands next to Trump while the president rips the respected journalist Peter Alexander of NBC News and the media in general

From my experience at the WH and campaigns, @PeterAlexander is the best of the best.

.@PeterAlexander is among the most respected journalists in the White House press corps. And the fact is, Americans are scared.

A fair question by @PeterAlexander that I personally would have asked and have during any time of crisis to any leader at the wheel. Local, state or federal. Wow. pic.twitter.com/CllWvmTzgn

This is not exactly a tough question. The president started out better earlier this week and has gotten more combative with reporters doing this for over an hour every day. https://t.co/enHnYe5K2e

This was an important question backed by thorough, truthful journalism. Mr. President, please stop being triggered by good journalism, it's dangerous for our country. Well done @PeterAlexander https://t.co/6tSi1bus6a