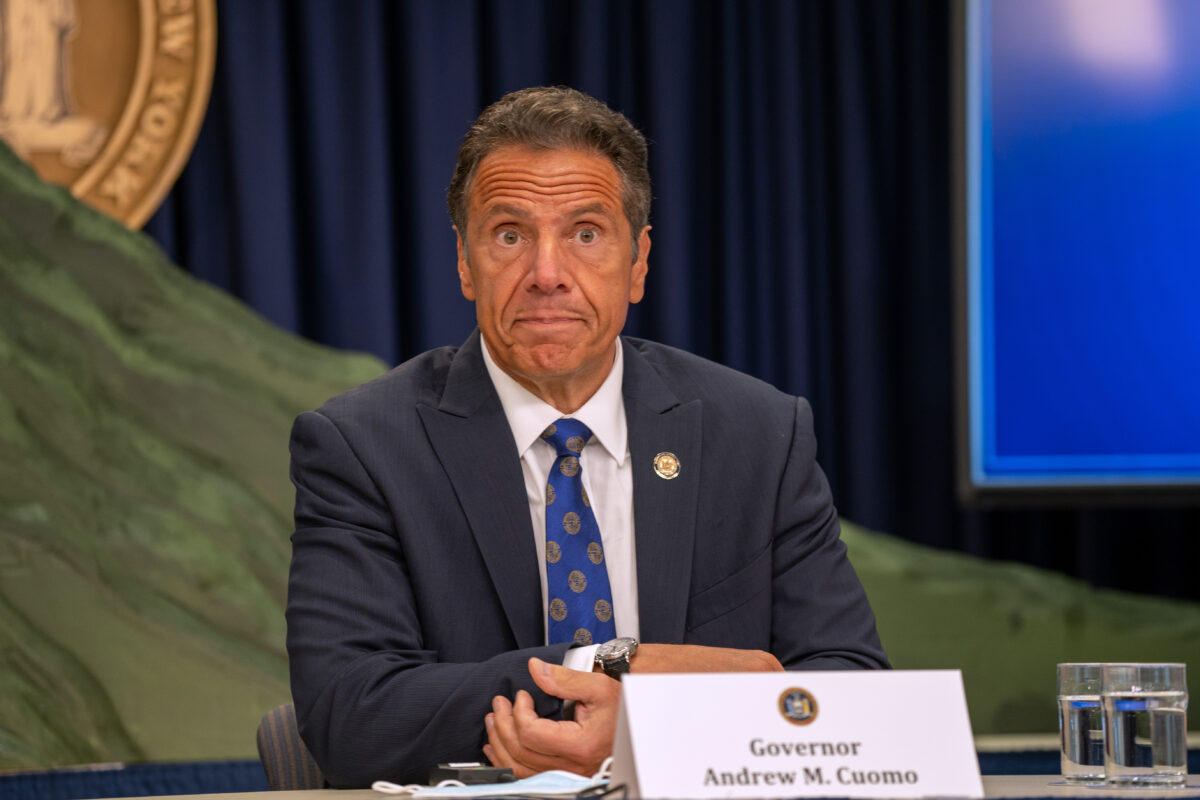 James revealed details during a stunning press conference that were pulled from a 168-page report on the investigation into allegations of sexual harassment by Gov. Cuomo that violated state and federal laws. That report featured 11 separate complaints, the details of which are listed below:

Since approximately late 2019, the Governor engaged in a pattern of inappropriate conduct with an executive assistant (“Executive Assistant
#1”), who is a woman. That pattern of conduct included: close and intimate hugs; kisses on the cheeks, forehead, and at least one kiss on the lips; touching and grabbing of Executive Assistant #1’s butt during hugs and, on one occasion, while taking selfies with him; and comments and jokes by the Governor about Executive Assistant #1’s personal life and relationships, including calling her and another assistant “mingle mamas,”3 inquiring multiple times about whether she had cheated or would cheat on her husband, and asking her to help find him a girlfriend. These offensive interactions, among others, culminated in an incident at the Executive Mansion in November 2020 when the Governor, during another close hug with Executive Assistant #1, reached under her blouse and grabbed her breast. For over three months, Executive Assistant #1 kept this groping incident to herself and planned to take it “to the grave,” but found herself becoming emotional (in a way that was visible to her colleagues in the Executive Chamber) while watching the Governor state, at a press conference on March 3, 2021, that he had never “touched anyone inappropriately.” She then confided in certain of her colleagues, who in turn reported her allegations to senior staff in the Executive Chamber.

In early November 2017, the Governor briefly met a New York State Trooper (“Trooper #1”), a woman, at an event on the Robert F. Kennedy Bridge (the “RFK Bridge,” also known as the Triborough Bridge). After meeting Trooper #1, he spoke with a senior member of his protective detail (“Senior Investigator #1”) about seeking to have Trooper #1 join the Protective Services Unit (“PSU”), the unit of the New York State Police that is in charge of protecting the Governor and works in close vicinity of the Governor. Trooper #1 was then hired into the PSU, despite not meeting the requirement to have at least three years of State Police service to join the PSU. In an email to Trooper #1 shortly after the RFK Bridge event, Senior Investigator #1 noted, attaching a vacancy notice with a two-year service requirement (as opposed to three years), “Ha ha they changed the minimum from 3 years to 2. Just for you.”6

After Trooper #1 joined the PSU, the Governor sexually harassed her on a number of occasions, including by: (1) running his hand across her stomach, from her belly button to her right hip, while she held a door open for him at an event; (2) running his finger down her back, from the top of her neck down her spine to the middle of her back, saying “hey, you,”7 while she was standing in front of him in an elevator; (3) kissing her (and only her) on the cheek in front of another Trooper and asking to kiss her on another occasion, which she deflected; and (4) making sexually suggestive and gender-based comments, including (a) asking her to help him find a girlfriend and describing his criteria for a girlfriend as someone who “[c]an handle pain,”8 (b) asking her why she wanted to get married when marriage means “your sex drive goes down,”9 and (c) asking her why she did not wear a dress. Trooper #1 found these interactions with the Governor not only offensive and uncomfortable, but markedly different from the way the Governor interacted with members of the PSU who were men, and she conveyed these incidents contemporaneously to colleagues. Several other PSU Troopers corroborated Trooper #1’s allegations, including some who had personally witnessed some of the touching and comments as well as the gender-based difference in the way the Governor treated Troopers.

In a series of conversations in 2020 with an aide, Charlotte Bennett, the Governor made inappropriate comments, including, among many other
things: (1) telling Ms. Bennett, in talking about potential girlfriends for him, that he would be willing to date someone who was as young as 22 years old (he knew Ms. Bennett was 25 at the time); (2) asking her whether she had been with older men; (3) saying to her during the pandemic that he was “lonely” and “wanted to be touched”;10 (4) asking whether Ms. Bennett was monogamous; (5) telling Ms. Bennett, after she told him that she was considering getting a tattoo for her birthday, that if she decided to get a tattoo, she should get it on her butt, where it could not be seen; (6) asking whether she had any piercings other than her ears; and (7) saying that he wanted to ride his motorcycle into the mountains with a woman. These comments by the Governor—as evidenced contemporaneously in numerous text exchanges Ms. Bennett had with others—followed and coincided with discussions she previously had with the Governor about her having been a survivor of sexual assault and made her extremely uncomfortable. They made her so uncomfortable that, following a series of exchanges with the Governor in June 2020, Ms. Bennett reported the interactions to the Governor’s Chief of Staff. While the Executive Chamber moved Ms. Bennett to a different position where she would not need to interact with the Governor in response to Ms. Bennett’s allegations, the Executive Chamber did not report the allegations at the time to the Governor’s Office of Employee Relations (“GOER”), the State agency tasked with conducting harassment investigations for State agencies, and did not otherwise conduct any formal investigation. Instead, the Executive Chamber’s senior staff sought to implement a practice whereby individual staff members who were women were not to be left alone with the Governor.

In May 2017, Virginia Limmiatis attended a conservation event in upstate New York on behalf of her employer (“Energy Company”) at which the Governor spoke. After the event, Ms. Limmiatis stood in a rope line to meet with the Governor, along with other attendees. She wore a shirt that had the name of the Energy Company written across the chest. When the Governor reached Ms. Limmiatis, he ran two fingers across her chest, pressing down on each of the letters as he did so and reading out the name of the Energy Company as he went. The Governor then leaned in, with his face close to Ms. Limmiatis’s cheek, and said, “I’m going to say I see a spider on your shoulder,”13 before brushing his hand in the area between her shoulder and breasts (and below her collarbone). Ms. Limmiatis was shocked, and immediately informed a number of other attendees of what had happened. Ms. Limmiatis came forward in this investigation after she heard the Governor state, during the March 3, 2021 press conference, that he had never touched anyone inappropriately.14 As Ms. Limmiatis testified to us, “He is lying again. He touched me inappropriately. I am compelled to come forward to tell the truth . . . . I didn’t know how to report what he did to me at the time and was burdened by shame, but not coming forward now would make me complicit in his lie, and I won’t do it.”15

During the period in which Lindsey Boylan served as Chief of Staff to the CEO of the Empire State Development Corporation (“ESD”) and later as Deputy Secretary for Economic Development and Special Advisor to the Governor, the Governor, among other things, engaged in the following harassing conduct on the basis of her gender: (1) commented on her appearance and attractiveness, including comparing her to a former girlfriend and describing her as attractive; (2) paid attention to her in a way that led her supervisor at ESD to say that the Governor had a
“crush”16 on her and to ask her whether she needed help in dealing with the Governor’s conduct; (3) physically touched her on various parts of her body, including her waist, legs, and back; (4) made inappropriate comments, including saying to her once on a plane, words to the effect of, “let’s play strip poker”;17 and (5) kissed her on the cheeks and, on one occasion, on the lips. Our investigation identified corroboration for Ms. Boylan’s allegations, including ones the Governor and the Executive Chamber denied. Following Ms. Boylan’s public allegation of sexual harassment against the Governor in December 2020 (at a time when she was running for public office), the Governor and the Executive Chamber actively engaged in an effort to discredit her, including by disseminating to the press confidential internal documents that painted her in a negative light and circulating among a group of current and former Executive Chamber employees (although not ultimately
publishing) a proposed op-ed or letter disparaging Ms. Boylan that the Governor personally participated in drafting.

In his interactions with another executive assistant, Alyssa McGrath, the Governor made inappropriate comments and engaged in harassing conduct, including: (1) regularly asking about her personal life, including her marital status and divorce; (2) asking whether Ms. McGrath would tell on Executive Assistant #1 if she were to cheat on her husband—and whether Ms. McGrath herself planned to “mingle” with men—on the two women’s upcoming trip to Florida, and then calling the two women “mingle mamas”;18 and (3) staring down her loose shirt and then commenting on her necklace (which was inside her shirt) when Ms. McGrath looked up.

The Governor met Kaitlin (whose last name has not been publicly reported) at a fundraising event on December 12, 2016. He had pictures taken with her in a dance pose (as the photographs from the event show), which made Kaitlin uncomfortable.19 Nine days later, the Executive Chamber reached out to Kaitlin to hire her to work with the Governor. Kaitlin was hired and approved to receive a salary of $120,000 (which was so high that it was laughed at during Kaitlin’s interview for the position). During the year she worked at the Executive Chamber, the Governor: (1) instructed her to act like a “sponge” to soak up knowledge, then proceeded to call her by the name “sponge,” which she found to be embarrassing, condescending, and demeaning;20 (2) asked about how certain members of his senior staff, known as the “mean girls”21 were treating her; (3) commented on her appearance on a number of occasions, including saying that an outfit she wore made her look like a “lumberjack”22 and commenting on her not being “ready”23 for work if she was not wearing makeup or was not dressed nicely; and (4) on one occasion, asked her to look up car parts on eBay on his computer, which she had to bend over to do, while wearing a skirt and heels, as the Governor sat directly behind her in his office, which made her feel uncomfortable. Kaitlin’s colleagues at the State agency she moved to after she left the Executive Chamber witnessed and corroborated the impact that her experiences at the Executive Chamber had on her, ncluding
becoming visibly distressed.

During the time that Ana Liss worked as an aide in the Executive Chamber from 2013 to 2015, the Governor: (1) addressed her almost exclusively as “sweetheart” or “darling”;24 (2) on occasion, kissed her on the cheeks and hand, touched and held her hands, and slid his hand around her lower waist; (3) commented on how she looked “lovely”;25 and (4) asked whether she had a boyfriend. Ms. Liss noted that these interactions were, in her view, inappropriate. She did not complain about or raise these incidents while employed in the Executive Chamber because, she found, “[F]or whatever reason, in his office the rules were different. It was just, you should view it as a compliment if the Governor finds you aesthetically pleasing enough, if he finds you interesting enough to ask questions like that. And so even though it was strange and uncomfortable and technically not permissible in a typical workplace environment, I was in this mindset that it was the twilight zone and . . . the typical rules did not apply.”26