Sanders Campaign Compares Bernie To Obi-Wan Kenobi, Who Was Vaporized by Darth Vader 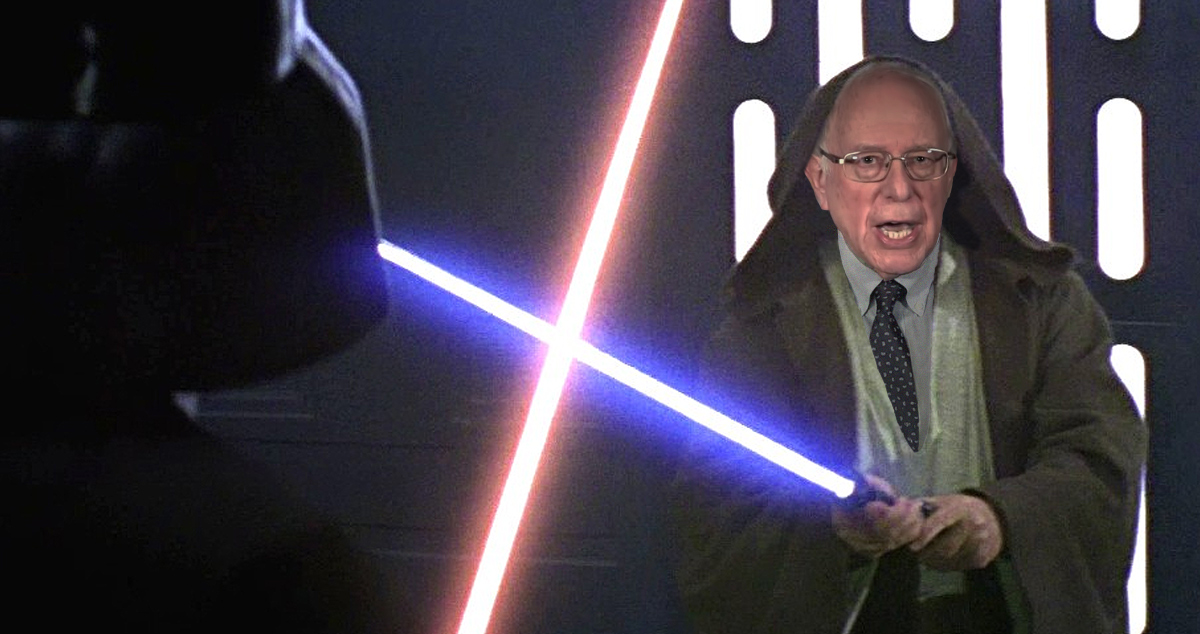 Bernie Sanders’ presidential campaign is now comparing the independent Vermont senator to Star Wars Jedi master Obi-Wan Kenobi, who infamously told Darth Vader “if you strike me down, I shall become more powerful than you can possibly imagine” seconds before he was vaporized by Mr. Vader.

In the latest edition of the Sanders campaign’s “Bern Notice” newsletter, senior campaign adviser David Sirota leaned into the comparison in an article entitled “The Hamptons & the Obi-Wan Kenobi Principle.”

The first several paragraphs are devoted to attacking California Senator Kamala Harris over her shift from supporting Sanders’ “Medicare for All” plan to releasing her own M4A pan and criticizing the Sanders plan, most recently at a Hamptons fundraiser.

But then, Sirota explained the aforementioned “Obi-Wan Kenobi Principle”:

Obi-Wan Kenobi warned Darth Vader that “if you strike me down, I shall become more powerful than you can possibly imagine” — and that principle now appears to be at play in the politics of health care. Indeed, it seems the more other candidates defend their insurance industry donors and attack Bernie’s plan to replace private insurance with a Medicare for All system, the better it is for Bernie.

Fans of the film will recall that Kenobi delivered this bit of high-handed trash talk just seconds before Darth Vader reduced him to a pile of dry-cleaning, albeit with Kenobi’s apparent assent.

Although Politifact: Coruscant has yet to weigh in on Kenobi’s claim, it’s tough to make the case that becoming a non-corporeal backseat driver equals “more powerful than you can possibly imagine.”

The bulk of Sirota’s piece is devoted to defending Medicare for All, while accusing other Democrats of trying to “preserve the private insurance industry whose premiums deductibles and co-pays now cost $28,000 a year to cover the average family of four,” but Obi-Wan’s errant boast notwithstanding, there’s a buried lede in there that should make Sanders’ rivals take notice.

According to recent surveys from CNN, ABC/WashPost, Reuters and Morning Consult, Bernie is now the most trusted candidate on the health care issue.

Sirota goes on to cite positive polling trends on Medicare for All and to make the case for Sanders’ plan based on the dysfunction in the current health care system.

Support for M4A fluctuates wildly based on how the poll questions are asked (often misleadingly), but the topline results indicate that Medicare for All is a very popular concept. While Democrats who aren’t named Elizabeth Warren have, as Sirota notes, spent their time attacking Medicare for All — often in scattershot fashion — instead of going after President Donald Trump on health care, Sanders has gained an advantage on a very important issue to Democratic voters.

The lesson for Democrats should be that their time would be better spent concentrating on the unifying themes of their health care proposals — like universal coverage and protections for things like pre-existing conditions — than treating Medicare for All like a policy womp rat.