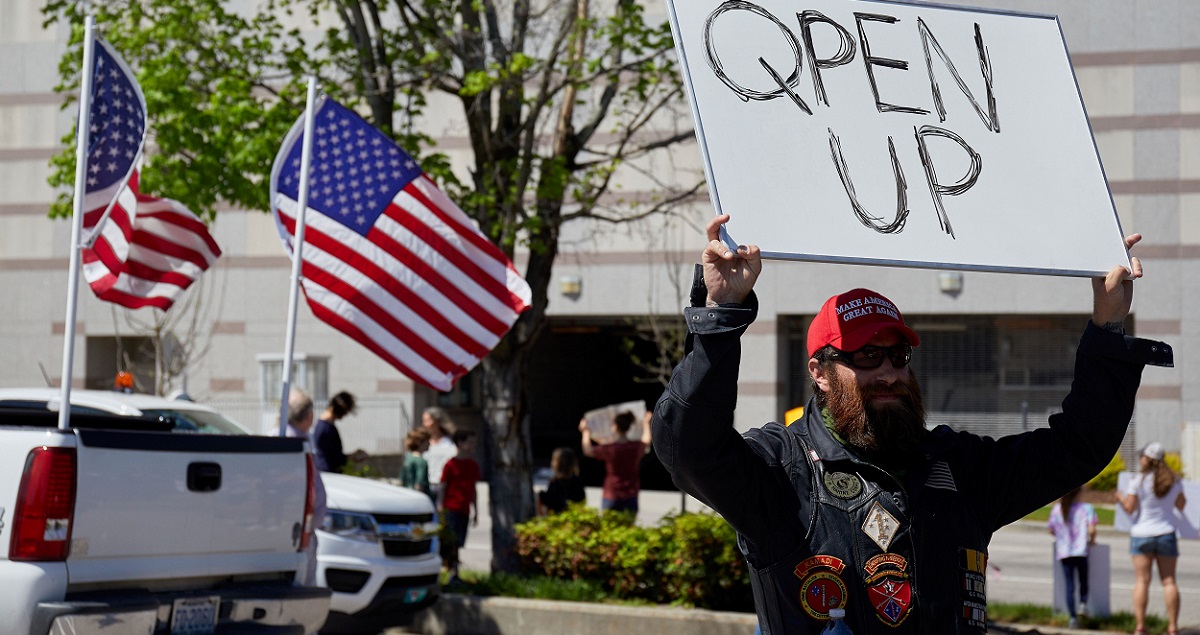 Stephen A. Moore, a member of the “Opening Our Country Council” announced by Trump this week, drew fierce backlash for saying that demonstrators protesting social distancing measures are like civil rights icon Rosa Parks, who was arrested for refusing to obey a racist segregation law.

On Friday, The Washington Post published an article in which Moore compared the protesters — some of whom carried Confederate flags and signs featuring swastikas — explicitly with Rosa Parks:

“I think there’s a boiling point that has been reached and exceeded,” said Stephen Moore, a conservative economist. Moore is a member of both the White House council to reopen the country and a coalition of conservative leaders and activists seeking to push government officials to relax stay-at-home orders.

“I call these people the modern-day Rosa Parks — they are protesting against injustice and a loss of liberties,” Moore said of the protesters.

Congratulations to Trump adviser Stephen Moore on a comment at once strikingly stupid and deeply offensive.
“I call these people the modern-day Rosa Parks — they are protesting against injustice and a loss of liberties.” https://t.co/2V1mhWFDC9 pic.twitter.com/TJIa4EZnap

Journalists and other prominent figures piled on Moore, and defended the towering legacy of Rosa Parks.

Stephen Moore, who has never met a black woman he didn’t love to interrupt, is comparing the people protesting the stay-at-home protestors to Rosa Parks. https://t.co/lWE7lNnsZS pic.twitter.com/SeSyASnfsz

I remember when Rosa Parks was waving around a confederate flag because she wanted to go back to some pork plant and work for minimum wage before contracting a virus and dying.

They don’t teach you that in the history books

A guy who said Trump's first act as prez was kicking a black family (the Obamas) out of public housing says right-wing activists protesting social distancing measures to protect the public from a deadly virus are like Rosa Parks.

Just let that one set in. https://t.co/IJt23zUtXC

#RosaParks couldn’t eat where she wanted, sit where she wanted, get jobs she was qualified for or vote. The right-wing protesters incited by #Trump demand the right to endanger everyone so they lawn fertilizer and get their roots dyed. #Coronavirus https://t.co/CxjA50a9Fx

Could you have imagined the outcome if Rosa brought a gun to the bus?

Rosa Parks and every other soul that participated in the Montgomery Bus Boycott endured more than 380 days of harassment, assaults and firebombings. They woke up on 380 mornings, one after the other, knowing they were putting their lives at risk. https://t.co/gorXJFQjce

Well, they’re close to Rosa Parks. They would have been driving the bus. https://t.co/GIC52px7RA

“I call these people the modern-day Rosa Parks—they are protesting against injustice & a loss of liberties,” Stephen Moore said of protesters who want to leave their houses.

A bunch of selfish assholes are…Rosa Parks? Vile, even for Moore https://t.co/9kjIodUuc2

Rosa Parks is in the news today—for the wrong reasons. If your kids ask you about her, here’s an excellent introhttps://t.co/orqnKybtKf @NGKids

“I call these people the modern-day Rosa Parks — they are protesting against injustice and a loss of liberties.”

A clip to remind everyone who Moore is: https://t.co/zobg4uzKJR

.@StephenMoore is a dangerous charlatan and fool. He calls the protesters he's egging on, modern-day Rosa Parks. Seems he knows less about history than he does about economics. #coronavirus

Stephen Moore is one of the least qualified people in America to speak on Rosa Parks. https://t.co/66FPaTyFe9

Moore made similar comments on a Youtube show several days earlier, when he told Freedom on Tap’s John Caldera that he was helping to organize the protests, and saying “This is a great time, gentlemen and ladies, for civil disobedience. We need to be the Rosa Parks here and protest against these government injustices.”

“So this is a great time, gentlemen and ladies, for civil disobedience," Moore said. "We need to be the Rosa Parks here and protest against these government injustices.”

Watch the video here (Not to mention another unbelievable clip of Moore).

In this case, Moore appears to be comparing himself to Rosa Parks, as well.