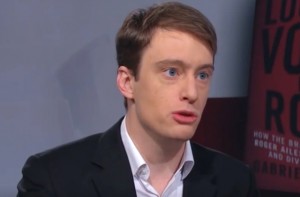 New York Magazine‘s Gabriel Sherman has been at the forefront of the reporting on sexual harassment allegations against Roger Ailes. He was first to report that Ailes was stepping down and has run multiple exclusives on the women in and outside of Fox who have spoken about alleged harassment.

Well, he apparently has another big exposé on the way, so Ailes’ attorneys reached out to The Daily Beast to offer a few comments on Sherman.

Susan Estrich and Mark Mukasey threw quite a lot of insults his way, including “Gabe Sherman is a virus, and is too small to exist on his own, and has obviously attached himself to the Ailes family to try to suck the life out of them… Roger is fine and doing well, and is not going to allow a virus like that to poison the atmosphere.”

Estrich even went the extra mile in making the following stunning statements about Sherman:

Gabe Sherman has made clear that nothing will stand in the way of his vendetta against Roger Ailes, and he will use any woman he can find—no matter how clearly and deeply troubled she is—to try to concoct allegations against Mr. Ailes.”

Citing Tantaros and former Fox News guest booker Laurie Luhn, who Sherman reported received $3.15 million in company funds to buy her silence after Ailes sexually abused her for two decades, Estrich added: “But Gabe is running out of women he can use and abuse. Ultimately, it will be clear that the real enemy of women is Gabe Sherman.”

Sherman has recently reported on a “black room” Ailes reportedly set up to wage PR campaigns against his enemies (including Sherman), and Fox apparently had a giant oppo file on him. Mukasey said in response, “I think Gabe Sherman has delusions of grandeur or self-importance if he thinks that.”

Sherman tweeted this out about their response: