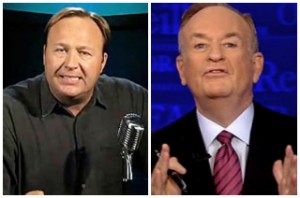 When Bill O’Reilly put Alex Jones‘ face next to the words “HATE SPEECH” in the opening of his show last night, he had to be expecting an impassioned response from the radio host. Jones did not disappoint today, calling O’Reilly a “bully punk” and challenging him to a pay-per-view boxing match.

“I’d like to get in a boxing ring with Bill O’Reilly,” Jones said, after accusing him of taking his words out of context on his show Wednesday night. “I challenge you to a pay-per-view boxing match. You think you’re so tough?” Jones accused O’Reilly of trying to intimidate his guests by turning their microphones off and pointing his finger in their faces. “You big, fat bully!” he exclaimed.

“You’re scared to have me on your show,” Jones said, predicting that if he was a guest, O’Reilly would draw 10 million viewers. “You’re jealous. Your radio show failed, you’re a failure.” Jones insisted that he represents the “independent” “wave of the future” while O’Reilly is stuck in the past. Increasing his intensity and volume, Jones screamed, “you want to start a fight with me, punk? Huh? You think you can shove me around? You’re a coward, punk, rat bastard!”

Jones then brought Rachel Maddow, who has also recently gone after Jones on the air, into his rant, equating the MSNBC host with O’Reilly in way she probably never anticipated.

“I’ve had enough of these cowards, up there–both of these guys–Rachel Maddow and him. I’m sick of them! I’m tired of them! They don’t have the will to actually debate me. Come on my show punk!”

While it’s highly unlikely that either O’Reilly or Maddow will be appearing on Alex Jones’ radio show any time soon, we can look forward to seeing if and how O’Reilly responds to this tirade tonight.