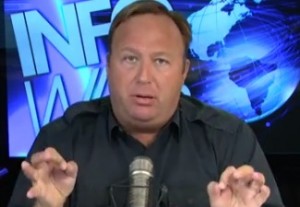 After several days of hype that Julian Assange would release news that would cripple Clinton’s campaign, the Wikileaks founder held a press event that did not live up to the expectations of her die-hard critics. Donald Trump supporters were especially eager for this thanks to Jones’ friend Roger Stone, but the reality put a damper on the InfoWars host’s live broadcast.

“You said it would get her indicted!” Jones fumed. “He was promising this damning evidence and he doesn’t release it now 34 days out and now he’s saying he’ll release it by the end of the year, so that smacks of a sell-out.”

Jones continued to rant about how Clinton might have offered Assange a deal to keep quiet, but he was largely preoccupied about how the whole thing was a gigantic disappointment. Reporters like Media Matters’ John Whitehouse and MSNBC’s Nick Ramsey highlighted several of the best parts from Jones’ tirade, which you can watch below.

Alex Jones has some thoughts about Julian Assange. pic.twitter.com/Z8J7ZXuJvC

Yup, you just watched Alex Jones rap “Move Bitch” from Ludacris, and call Assange a “Hillary butt-plug.” Aren’t you going to be so sad when the election is over?

For the record, it is highly unlikely that Assange is a Clinton lackey after everything Wikileaks has said about her.

You can watch Jones’ complete rant here, via The Alex Jones Channel.