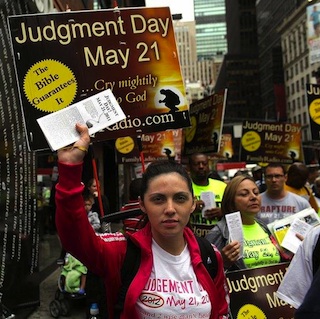 Predictions of tomorrow’s Rapture — those specifically originating from an 89-year old California based preacher who has only been wrong about the world ending once before!) — could be a really good thing for Atheists. No, I’m not just talking about them being a boon for snarky jokes on Twitter and Reddit. I mean that this could be a perfect opportunity for Atheists, one of the most hated minorities in America, to show that you don’t need God to be a good person.

First off, in case you’re curious, I am not an Atheist. I consider myself an Agnostic (yes, I’m imagining receiving the same boos that Joel McHale’s character Jeff got when he smugly admitted the same on Community). My basic thinking is, if human beings can’t even figure out their DVRs (mine cut off the first few minutes of that and every other episode of Community), chances are good that they can’t comprehend the origins of the universe either. However, since I live in the God-less city of New York, many of my friends are Atheists. And, like them, I think that Family Radio is perpetrating a massive hoax on the poor, lost, and trusting.

I remember a month or so ago when I first saw a giant Family Radio-funded billboard in my beloved city. It wasn’t small. And it wasn’t somewhere obscure. It was a giant, brightly colored thing stationed just a couple blocks away from Penn Station. I’d heard the rumblings of the “May 21st” theory before, but this was the first time that I realized just how big it was. And, thusly, how hilarious it was. I instantly joined in the chorus of “rational” people mocking those who had been misled that, on an upcoming Saturday, they’d be sucked into the sky to hang out amongst the clouds. I mean, what could be more ridiculous? However, a couple weeks later, something happened that dampened my fun.

I was on NPR’s website listening to the cast recording of The Book of Mormon (more fun at the expense of the faithful, I’m afraid), when I saw that they had a story about those that believe in this coming Rapture. It promised interviews with them and I rushed to listen, expecting to have a good chuckle. A few seconds in though, my smile started to fade. And then, when I reached the interview with a young couple, it completely vanished.

“‘Knowing the date of the end of the world changes all your future plans,’ says 27-year-old Adrienne Martinez.

She thought she’d go to medical school, until she began tuning in to Family Radio. She and her husband, Joel, lived and worked in New York City. But a year ago, they decided they wanted to spend their remaining time on Earth with their infant daughter.

‘My mentality was, why are we going to work for more money? It just seemed kind of greedy to me. And unnecessary,’ she says.

And so, her husband adds, ‘God just made it possible — he opened doors. He allowed us to quit our jobs, and we just moved, and here we are.’

Now they are in Orlando, in a rented house, passing out tracts and reading the Bible. Their daughter is 2 years old, and their second child is due in June. Joel says they’re spending the last of their savings. They don’t see a need for one more dollar.

‘You know, you think about retirement and stuff like that,’ he says. ‘What’s the point of having some money just sitting there?’

‘We budgeted everything so that, on May 21, we won’t have anything left,’ Adrienne adds.”

This was the first time it hit me. These are real people and if (ugh, when) May 22nd comes and the world hasn’t ended, there lives will have. Some of these people will have absolutely nothing.

Organized religions, as silly as they sound to those that don’t prescribe to them, are just a way for people to find comfort in this tough life. Through all the dirty words and crude jokes, that was the message of the aforementioned Book of Musical and it’s true. Religion gives people comfort and that’s a good thing. We all need it. Atheists find it in scientific theories and progress. Devout people find it in ancient stories. And these May 21st believers were just unlucky enough to find it from the mouth of a scam artist. They made a mistake and got dealt a bad hand and, like when that happens to any of us, they deserve a little help. What if Atheists were the ones to do it for them?

You hear so much about religious people doing good deeds and selflessly helping others. They become good people because their holy books and religious leaders tell them to. At least, that’s what many people prejudiced against Atheists argue. They wonder how anyone can truly be good without concrete guidelines set down for them. Atheists know that that’s ridiculous. Unless you’re a sociopath, we all know that being good to others is a good thing without the help of giant men in the sky saying so. This is a perfect chance to prove that. What I’m proposing is that some Atheist group creates a charity to help those who have lost all of their money following Harold Camping and his church.

Now, I’m obviously not the first person to think of an Atheist-backed charity, and many already exist. However, as more and more media organizations pick up Rapture fever and report on tomorrow’s coming non-event, the possible exposure becomes bigger and bigger. There is huge potential for sending a positive message here.

So, yes, Atheists can continue to make fun of these people (I’m sure I’ll be guilty of making a few more jokes this weekend as well) but they can also do more. I mean, isn’t smugness why so many of the faithful hate us faithless in the first place? This can be a huge step to finally showing that Atheists can be just as good and kind as the rest.

Perhaps, through this, they can finally make believers out of the believers.