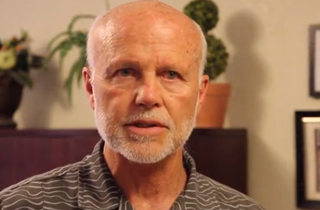 For the first time since 1985, the Republicans have control of the Nevada Assembly. And to lead their coalition, they have designated Ira Hansen to be the Speaker of the Assembly, passing over the man already leading the GOP caucus in favor of a man who actually believes in conspiracy theories.

According to the Reno News and Review, which reviewed over 13 years of columns published in the Sparks Tribune, Hansen has some wild opinions. He believes that Mitt Romney is “too liberal,” is openly pro-Palestine (which allegedly “freaked out” Nevada Republican rainmaker Sheldon Adelson), and believes that the Clintons actually caused the Oklahoma City bombings.

“No Nevada official has ever given the public a more detailed blueprint to his thinking than Hansen,” wrote the News-Review. “In these columns, his viewpoint evolved very little. In fact, some columns ran unchanged time and again as the years passed.”

Here is a sampler pack of his beliefs, containing multiple flavors of crazy.

The Clintons caused the Oklahoma City bombings in 1998:

In one instance, shortly before the execution of Timothy McVeigh, Hansen argued that the Clinton administration was responsible for the Oklahoma City explosion, with McVeigh either innocent or a dupe: “Claiming the building was a public hazard the government began tearing it down long before any reasonable and complete investigation could occur. … Distrust of the federal government was at an all time high prior to the bombing. Afterward, public sympathy shifted the other way, masterfully manipulated by the Clinton Administration.”

All homosexuals are gay men, and all gay men are all child molesters:

Hansen seems to define men who abuse boys as homosexual, though the scholarship says that most abuse is committed by heterosexuals. He also seems to consider gays to be deviant by definition.

“Considering only about 2 percent of adult males are homosexuals, the numbers show why homosexuals have been historically regarded as such a threat. Male homosexuals are grossly disproportionate in child molestation cases, and the youth orientation of male homosexuality drives this trend.”

…His preoccupation with the notion turned into a sort of hobby. “Yet another child molester has been discovered locally, accused of molesting a 15-year-old boy,” he once wrote. “I’ve been keeping a rough tally on homosexual/heterosexual molesters as reported locally, and roughly half of all molestations involve homosexual men preying on boys.” Hansen gave no details, nor did he publish his list, nor did he explain how he knew the sexuality of the alleged molesters.

And also, all his political enemies are homosexuals:

Oh, and he calls black people “darkies” and Democrats “masters”:

In an attack on public education and teacher unions, Hansen wrote, “The Democratic coalition would split asunder if the NAACP & co. actually promoted what black Americans truly desire—educational choice. The shrewd and calculating [black] ’leaders’ are willing to sacrifice the children of their own race to gratify their lust for power and position. The relationship of Negroes and Democrats is truly a master-slave relationship, with the benevolent master knowing what’s best for his simple minded darkies. For American blacks, being denied choice and forced to attend the failing and inferior government school system is a form of involuntary servitude. Let’s call it what it truly is—educational slavery.”

And when he’s not calling them “darkies,” he just plain calls them “negroes”:

Hansen tends to use the term “Negro” and often does not capitalize it. In one column, he described Washoe Republican Sen. Maurice Washington (whom he supported) as black but in the same column called President Obama (whom he opposes) a “negro”—lower case.

There is much more content below. (We haven’t even covered his thoughts about Latinos, so here’s a preview: “At Spanish Springs High School, the large Hispanic population has tended to congregate amongst themselves and boldly flaunt their Mexican heritage by having the green, red and white flag of Mexico displayed in various ways.”)