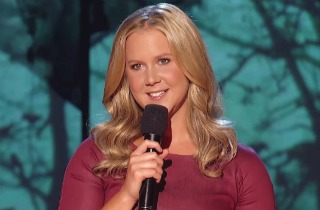 Comedienne Amy Schumer has catapulted into stardom, between the success of her Comedy Central show Inside Amy Schumer and her upcoming movie Trainwreck. But with discussions of political correctness abound, it was only a matter of time until Schumer received such criticism for her comedy.

The Guardian has a column up this weekend, written by Monica Heisey, who writes a lot about Schumer’s amazing successes and ability to pull off “funny, feminist, mainstream entertainment.”

But amid all the praise of Schumer’s talents, Heisey writes, “Schumer has a shockingly large blind spot around race.” She calls out a series of “tactless” jokes Schumer’s made, including the line, “I used to date Latino guys. Now I prefer consensual.”

Well, Schumer fired back today, tweeting “Put down your torches before reading this so you don’t catch on fire” and posting images of her lengthy defense of her comedy. Here’s what Schumer had to say:

I enjoy playing the girl who time to time says the dumbest thing possible and playing with race is a thing we are not supposed to do, which is what makes it so fun for comics. You can call it a “blind spot for racism” or “lazy” but you are wrong. It is a joke and it is funny. I know that because people laugh at it. Even if you personally did not.

I am not going to start joking about safe material. And don’t ask that of me. I love what I do and won’t let anyone take that away. I ask you to resist the urge to pick me apart.

Trust me. I am not racist. I am a devout feminist and lover of all people. My fight is for all people to be treated equally. So move on to the next person who is more deserving of your scrutiny and not the girl in your corner.

Sincerely Amy (a dirty half Jew)