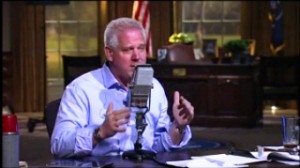 As I wrote on Tuesday, many on the right have gone lengths to tie President Obama‘s new “Forward” slogan to Marxism, communism, socialism, fascism, etc. Some seem to suggest that this is further proof of his insidious Marxist beliefs. One of those people is Glenn Beck. After reading my column, he and his co-hosts took to their GBTV web show to call me a “moron” and a “buffoon” for saying that President Obama is not a Marxist. The following is my response, in the form of an open letter to Mr. Beck. Video of Beck’s comments is below my letter.

First off: Hi. My name is Andrew Kirell. It’s pronounced like Steve Carell, so no extra “ee” sound at the end. But I just started here at Mediaite last week so how would you know.

You probably don’t remember me from when I was an intern for ABC News 20/20. We met at your studio and you told me “God bless you,” because I told you I was a libertarian studying economics at George Mason University. Yeah, that’s me. The “moron” who is now part of that vast left-wing media conspiracy to cover up President Obama’s supposed Marxism. I’m not upset — Glenn Beck calling me a “buffoon” gives me the street cred I need for this new gig.

It’s difficult to respond to an argument that doesn’t make much of a real concrete point but. . .

To your credit, you admit that the “Forward” slogan is not proof alone that the president is a Marxist. But when the slogan is added to all of the president’s big government policies and previous associations with left-wing thinkers, you reason that “it would be almost impossible for Obama to not be a Marxist.” And because I dispute the flawless logic of this theory, I am a “complete and total moron.”

Your co-host Pat Gray calls me a “moron” for finding it hilarious that Wisconsin’s motto is “Forward,” because, didn’t I know that Joseph Stalin‘s daughter moved there? Wow, Wisconsin must be a hotbed of Marxism. But it is hilarious because then I’ll assume the state’s millions of Republicans (including Gov. Scott Walker) who haven’t spoken out against the motto MUST be part of this vast Marxist conspiracy you seek to vanquish. By the way: Stalin’s daughter did move to Wisconsin…as an anti-communist who subscribed to The National Review.

The three of you are astonished that I suggested Obama is a “corporatist.” You assume I’m some blame-corporations-first lefty but actually, Mr. Beck, I meant it in the exact “statist” way you described: Big Government and Big Business have an unholy alliance; one that acts as a perpetual drain on tax dollars. But I’m one of “those people” since your knee-jerk reaction to anyone who disagrees with you is that they must be part of one of your chalkboard conspiracies.

Is it not enough to oppose President Obama and to criticize him for his policies? Why does he have to be a closet “Marxist” to be opposed? I am no fan of the president either, but I give the man the benefit of the doubt. He’s just a well-intentioned do-gooder who believes government can solve our nation’s woes, and is happy to “let the market work” when it works to his satisfaction. Far from some sinister Manchurian Candidate-like plot.

You also asked whether I’ve read the Communist Manifesto, because I must be too stupid to realize that our government has grown, not shrunk. Yes, I actually did read it. Have YOU? Then please, do go ahead and articulate Obama’s thoughts on commodity fetishism, the division of labor, and primitive accumulation.

Look, I don’t mean to get all didactic on you but you really ought to be able to distinguish social democracy, socialism, and communism. You use the three interchangeably, without nuance. To mention Stalin – one of history’s worst monsters – in the same breath as Obama is offensive on so many levels.

And really: who cares if Obama grew up surrounded by radical leftists? Judge the man by how he affects policy, not on your conspiracies about whether he’s an avowed Marxist who kneels nightly before his copy of Mao’s “Little Red Book.” Obama is a central planner, yes, but so were Nixon and Bush. Obama certainly doesn’t have deeply-repressed visions of marching people to their deaths in a gulag.

I know I speak for many libertarians when I say we were horrified when you once identified as vaguely “libertarian.” Your sometimes poisonous rhetoric and conspiracy-mongering is in some ways more harmful to the smaller-government movement than the very bumbling politicians in Washington we battle. You make it harder for us serious small government advocates to win the Battle of Ideas. You make it harder for anyone who criticizes big government to be taken seriously.

To quote William F. Buckley: you, sir, are “a pyromaniac in a field of straw men.”

But please set me ablaze anytime.