Andrew Breitbart Would Be Livid With Steve Bannon Right Now 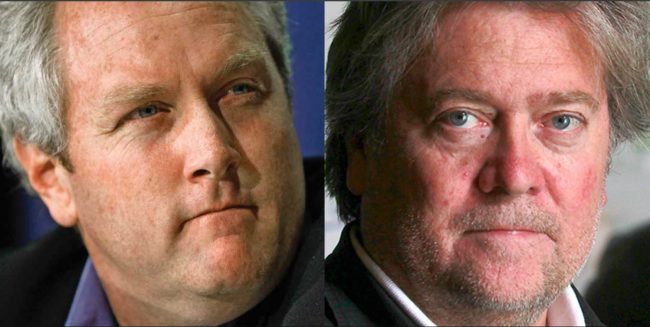 The Friday firing of Trump advisor Steve Bannon has already been exhaustively overanalyzed, but there is at least one significant aspect of it which has gotten little or no attention. Now that Bannon is returning to lead Breitbart.com, what would Andrew Breitbart, the late founder of that news organization, think of what has transpired in this last super crazy year now that things seem to have gone full circle for Bannon.

In my view, Andrew would be furious with Bannon on multiple levels.

I am well aware of the inherently precarious nature of trying to speak on behalf of someone who is dead. This is particularly the case when the person in question is a man with whom you had a dramatic falling out a couple of years before his shocking sudden demise.

For context, Andrew and I were quite close in the 2006-2010 range. We spent a ton of time together under some rather extraordinary circumstances as his fledgling media empire was just starting to gain traction.

At one point, I would have said he was probably my best friend in Los Angeles. He was one of about 3-4 people with whom I spent my 40th birthday, and he was the only one who brought a gift.

We made an intriguing team because, while our interests were exactly the same (taking on the liberal media), our talents and experiences were extremely dissimilar and complimentary. Our relationship broke apart, however, when I realized that, much to my astonishment, Andrew’s business interests and personal ambition caused him to view/treat me, absurdly, more as a potential branding threat than as a friend fighting in the same cause.

Admittedly, I am hardly the most qualified person to speak about what Andrew would be thinking today. I am probably the only one who knew him well enough to do so credibly and who is not either invested in a particular myth, or afraid of pissing off the wrong person or group.

While it has not gotten nearly the attention it deserves (largely because Breitbart.com and Bannon have a huge incentive for it to be forgotten), there is absolutely no question that Andrew would never have supported Donald Trump in the race for the Republican presidential nomination. He also never would have allowed his news organization to completely prostitute itself for the purposes of this celebrity conman who Andrew knew was no conservative.

He would have been particularly embarrassed that Breitbart.com sold out to Trump so badly that it became known as “TrumpBart.” And he would have been humiliated that his namesake actively attacked real conservatives during the campaign in their overt effort to protect Trump at all costs.

On the other hand, he would have loved the attention and the perception of credibility/power which came to Breibart.com as Trump ascended to the presidency and they were seen as a king-maker. When I knew Andrew, the idea that Breibart.com could possibly achieve that kind of influence by 2016 was even more preposterous than if we had been told that by then Tiger Woods would be irrelevant and Joe Paterno would die (unfairly) in total disgrace.

It is my belief that, once Trump got elected, Andrew would have seen/rationalized the sell out as an ends justifying the means situation. Having Bannon go from running Breitbart.com, to managing a successful presidential campaign would have been a source of great pride to Andrew and he would have seen Bannon’s position as Trump’s senior advisor as a tremendous opportunity for the cause.

Today, Andrew would say that this, likely once in a lifetime chance, has now officially been squandered and that the price Bannon will force the overall cause to pay is going to continue to get far more exorbitant than it was ever worth. This is because it is clear that, after achieving literally nothing in his very short tenure in the White House, Bannon is now going to turn Breitbart.com’s fire far more on Republicans than on Democrats.

This is a strategy that Andrew never would have approved of, especially when it is so obviously based in one man’s thirst for vengeance. But what really would have ticked Andrew off on Friday was Bannon’s boastful words about HIM having created a “fucking machine” at Bretibart.com and how excited he is to get his “hands back on my weapons.”

Bannon did not build Breitbart.com (his biggest hire there, Milo Yiannopoulos, was fired in disgrace earlier this year) and for him to claim that he did is an utter insult to Andrew’s legacy. Also, Andrew would never have accepted the concept that the content of his organization should be seen as weapons to be used to forward the personal agendas/vendettas of one man.

Andrew absolutely saw what he was doing in war-like terms. But, for the most part, the battles he waged were against the left, not the right, and they were intended to champion a cause far greater than that of one egomaniac (whether that is Bannon, or Trump himself).

Ironically, the only “winner” I see coming out of this latest chapter in this epic clusterfark is likely to be Trump. Bannon can’t attack Trump because Breitbart.com will lose audience and appear to be admitting that they were wrong about him all along.

Instead, Bannon, if only by coincidence, will do Trump’s work for him in building a narrative for his cult to explain why his presidency was a disaster. You see, it wasn’t that he was uniquely unqualified for the job, it was those damn globalist cucks in the Republican Party who sabotaged him!

For all of this faults, Andrew Breitbart was a far better man than Steve Bannon. The fact that each is where they currently are is a great indication that this existence may be meaningless enough to actually justify a Donald Trump presidency.