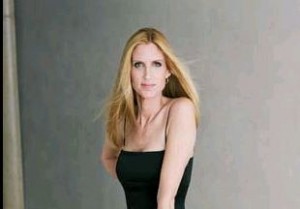 Conservative columnist Ann Coulter appeared on Alan Colmes‘ radio show Thursday to defend her use of the word “retard” in a tweet about Monday night’s presidential debate, describing the responses from disabled people and advocacy groups as “bullying” by “liberal victims,” and telling people with disabilities who don’t approve of the word “Screw them!”

Alan tried gamely to get Coulter to understand why her use of the word was offensive (even to “liberal victims” like Michelle Malkin), but it was a doomed exercise, since Ann Coulter isn’t really that ignorant, she just thinks she’s protecting her unapologetic “brand.”

During Monday night’s final presidential debate, Coulter tweeted to her followers that “I highly approve of Romney’s decision to be kind and gentle to the retard,” an apparent reference to President Obama. The tweet drew widespread denunciation, even from Coulter’s fellow right-wing provocateur Michelle Malkin, and an invitation from Special Olympian John Franklin Stephens to come and meet some of the people she insulted.

Coulter spent a good ten minutes trying to defend her tweet, but the essence of her argument is that she would never use the word “retard” to describe a disabled person, but that it was okay to use it on President Obama because he’s not disabled. Coulter knows better, like I said, and is really only burnishing her “edgy” reputation at this point. As a PR move, this looks like a miscalculation, but it is her career, and she’s the one who is going to miss it the most. Alan is absolutely right that this is not a right/left issue, and if it ever was, it ceased being one when former Alaska Gov. Sarah Palin rose to prominence, and raised awareness among conservatives about special needs children, and among liberals about ableism. Coulter is miscalculating if she thinks conservatives will simply close their ears to this.

As such, it’s hard to care whether Coulter ever apologizes, but to the extent that there might be people listening to her who are still confused about this issue, let’s straighten a few things out. First of all, nobody is telling Ann Coulter that she can’t use that word, but Mr. Stephens is probably right, she might have trouble getting booked on television if she does. That’s partially because the reaction of this community to slurs like this has been so thoughtful, giving Coulter’s cries of “word policing” no surface to bounce off of. Special Olympics Chairman Tim Shriver‘s approach, in campaigning to get people to stop using the word, has been “to be a teacher, not a policeman.”

“You’re allowed to be humiliating, degrading and hurtful,” Shriver told Stephen Colbert in an interview, “and I’m allowed to petition you to at least recognize what you say and be aware of the option you have to stop.”

Coulter is saying “Screw them” to a group of people who are asking for the most reasonable thing in the world, in the nicest way possible. Let’s see how that works out for her.

Second, even though Coulter is only pretending not to know why her insult was offensive to disabled people, and not just to President Obama, it bears explaining anyway, for those who might hear Coulter’s words and still be confused. Coulter is aware that “retard” is a slur used to describe people with certain disabilities (she acknowledges this when she says she would never use the word in that context), and by applying the term to a non-disabled person as an insult (which she also acknowledges), she is making a value judgement about those disabled people, that to be called one of them is an insult. The same principle applied to Keith Olbermann‘s attempt to insult Ann Coulter as transgender (for which he eventually apologized); the fact that he thought transgender was an insult demonstrated contempt for them, as well as for Coulter. It’s also why President Obama’s own self-deprecating crack about the Special Olympics (for which he also apologized) was offensive, because it the remark was premised on disability as an insult.

Finally, for those who feign confusion about what they’re “allowed” to say, including Coulter, who pretends not to understand the difference between “retard” and words like “imbecile,” it’s pretty simple: you’re “allowed” to say whatever you want, but if someone asks you really nicely not to, maybe consider not saying it.

There are probably people for whom the outrage over words like “retard” is just a cheap way to shame an opponent, and shame on them for that, but Coulter’s attempt to normalize that word is something that actually hurts people, and I hope she just stops.

Here’s the clip, from Alan Colmes: