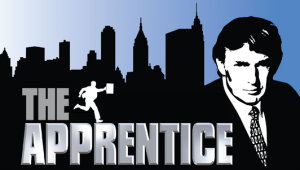 Donald Trump reportedly has some big plans in store for the day he takes office, so he’s talking with an old friend about how to make it all happen.

Mark Burnett is the reality show producer who helped Trump create The Apprentice, and according to The New York Times, the mogul met with him yesterday to talk about how to make a grand entrance at his inauguration ceremony next year. Evidently, this will include “a parade up Fifth Avenue, a helicopter ride to Washington from New York that could hold the attention of millions of people expected to watch from around the world.”

Thomas Barrack, Jr. who heads Trump’s Presidential Inaugural Committee, said Burnett was involved in plans to produce the ceremony. “The president-elect wants this to be simple. He wants this to be about the people,” said Barrack. “This [meeting] was about throwing stuff out if you are thinking in the frame of mind of what a global audience would see.”

In the last weeks of the election, Burnett’s relationship with Trump was thrust into the spotlight over controversies that emerged from Trump’s reality TV days. After Trump’s Access Hollywood bombshell came to light, Burnett faced pressure from people who demanded that he release unaired Apprentice footage, which was said to have even worse material than the comments about grabbing women “by the pussy.”

Burnett insisted that he was not in the tank for Trump, and he denied reports stating that he threatened legal action against anyone who leaked any more NBC tapes that damaged Trump.