Are Democrats Really About to Start Calling for Obamacare Repeal?

Are Democrats Really About to Start Calling for Obamacare Repeal? 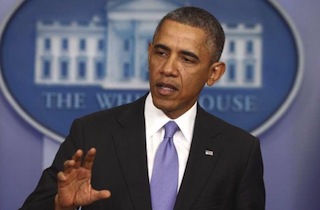 Could the troubled Affordable Care Act rollout get so bad or last so long that Democrats will turn on their party leader’s signature legislation?

That’s Monday’s narrative thanks to two articles, one by Josh Kraushaar at National Journal and one by Todd Purdum in Politico, which read in last week’s vote for Fred Upton’s bill to extend insurance policies portents of Democratic defection. Quoting Kraushaar’s piece, “Why Obamacare Is On Life Support”:

Unless the HealthCare.gov website miraculously gets fixed by next month, there’s a growing likelihood that over time, enough Democrats may join Republicans to decide to start over and scrap the whole complex health care enterprise.

[…] Would President Obama sign a death warrant on his own signature legislation? That’s almost impossible to imagine, but it’s entirely reasonable that he may not have a choice in the matter. Consider: Despite the White House’s protestations, 62.4 percent of the House voted for Michigan GOP Rep. Fred Upton’s legislation (261-157), just shy of the two-thirds necessary to override a veto…

Democrats are in better shape on the Senate side, but not by as much as conventional wisdom suggests. Senate Majority Leader Harry Reid will do everything in his influence to protect the president—and block embarrassing legislation from being voted on—but not if it means he’ll be losing his majority gavel next year…To overcome a veto, Republicans would need 22 of those 28 winnable votes. Right now, they wouldn’t come close. But Reid and the White House may end up relying on swing-state Democrats like Claire McCaskill and Bob Casey to protect the law. If the political mood doesn’t improve in short order, will they want to be in that position?

Not so, said the Internet, as this doomsaying provoked a torrent of criticism from other writers and bloggers, several of whom labeled it outright “fantasy”: 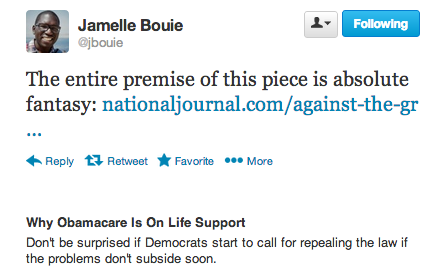 Bouie’s diagnosis was backed up by Washington Post’s Jared Bernstein:

“The problem with Kraushaar’s fantasy—and it is a pure fantasy, one which winds up with an imagined vote count on a repeal veto override—is that no actual Democrats in Congress can be found who are even hinting at anything resembling such a dramatic reversal. None. There are a handful of House Democrats who have always opposed the law, but beyond them, nada. Zip. Zilch.”

Bernstein, arguing similarly to MSNBC’s Chuck Todd this morning, said that to turn on Obamacare would be a gift to Republican challengers. Instead, Democratic candidates, even those in vulnerable districts, will likely do exactly what they did last week: vote against a small aspect of the bill on a “free vote”—i.e. one that has no chance of passing, like Upton’s bill—while siding with the Democrats on any piece of legislation that undermines a central aspect of the ACA. “The reality is that the electoral incentives for Dems work heavily against them abandoning the law,” Bernstein wrote.

HuffPost’s Jason Linkins didn’t buy Kraushaar’s leap from the current Democratic anxiety about the law’s rollout to their hypothetical panic to repeal it in the future. “Cool story, bro, but you got any sources on this?” he asked about Kraushaar’s piece. “Well, we learn that Vice President Joe Biden didn’t mention the Affordable Care Act whilst stumping for Sen. Kay Hagan (D-N.C.), and there are critical comments from two House Democrats who nevertheless saw fit to cast a vote against Rep. Fred Upton’s (R-Mich.) legislative ‘fix.'”

“Come on with this stuff,” Slate’s Dave Weigel agreed, adding:

You can find anonymous Democrats to panic about anything, and you can find plenty of Democrats willing to trash implementation so far, on the record. But recently, when I was talking to one of the Democrats assigned to win House seats in 2014, I got the impression that the panic is tied largely to the crisis of healthcare.gov. If the website sucked wind through Thanksgiving, said the Democrat, it was dreadful but, for Democrats, survivable. If it failed into 2014? That would blow open doors for Republican-led delay bills, and the party’s vulnerable members would start to endorse those bills, because what choice would they have?

Day to day, it’s very easy to write a “collapse of liberalism” story. Talk to Democrats, though, and you learn that to a staggering degree they think a fixed website would end the general crisis. One month of increased signups—that’s all they want. Ask them how they feel in mid-December.

Ditto Mother Jones’ Kevin Drum: “The Obamacare rollout has unarguably been a fiasco, but memories are short, both on Capitol Hill and in the country at large,” he wrote. “Fix things fairly soon and it will be a non-issue in next year’s election…Especially,” he added in a footnote, “if Republicans decide to hijack the news cycle in January with some more insane budget demands. Given their almost comical lack of party discipline in this area, I’d say this is a good bet.”