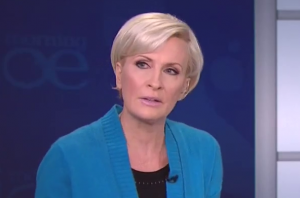 On Friday’s Morning Joe, MSNBC’s Mika Brzezinski causally dropped what appeared to be a bombshell. During the presidential campaign, she claimed, the Hillary Clinton campaign had “called” NBC in an effort to have her taken “off of the air.” This supposedly happened because Brzezinski was making comments which indicated that she thought that the Clinton camp was not taking the risk of losing to Donald Trump seriously enough.

If true, this is obviously an extremely serious charge with significant implications. However, for several reasons, I am not buying it.

To be clear, my skepticism isn’t because I think it is beyond the Clinton camp’s modus operandi to try to pull something like this. The Wikileaks revelations have shown time and again that they clearly saw most of the news media, especially those at MSNBC, as effectively working for their team. After all, based on the last three presidential election cycles, it would be hard to blame them for expecting anything different than the highly favorable coverage which the Democratic candidate has gotten from those outlets.

Then there’s the Clinton team’s notorious level of unwarranted entitlement issues, and that Wikileaks produced an email chain in which DNC staffers specifically expressed frustration with Brzezinski. Putting all of this together, it isn’t hard to imagine someone from Hillary’s staff WANTING to make such a ridiculous demand.

But that doesn’t mean it actually happened.

The primary reason that I don’t think it really did is what I call the “National Enquirer Rule.” That is, for a salacious allegation to be true, there must be at least relative equivalence/correlation between the significance of a charge and the way that allegation is reported. When the National Enquirer reports that the Obamas are getting a divorce but they put that “news” on only half of page 12 with barely a mention of it on the cover, then you can pretty well rest assured that the story isn’t true. Conversely, if they use their entire front page, with exclusive photos, to do a story on a former Democratic presidential candidate, like John Edwards, having a love child, then you might want to pay attention to what they are claiming.

Since Morning Joe is an opinion show which frequently dabbles in gossip, and has flipped its position on Donald Trump enough for Mika and Joe Scarborough to get hired as a Cirque du Soleil tandem, holding them to this tabloid standard seems more than fair. Using the “rule” in this situation, it appears that if the story Brzezinski told was completely true, then it would have been presented very differently.

Had this story really happened, everything would have gone down differently than it apparently did here. In a remotely ideal world, obviously MSNBC and Morning Joe would have immediately reported that one of the major presidential campaigns was trying to get Mika removed from the show because of her opinions. That not only would have been the journalistically proper thing to do, but it also would have been a huge and very damaging story to the Clinton campaign. It also would have given Morning Joe added credibility and stature for clearly not being in the tank, like every other MSNBC program was, for Hillary.

So instead, we are to believe that everyone refrained from reporting this at the time and passed up not only an important story, but also a chance to be in the national spotlight (which seems, to say the least, very UN-Morning Joe-like)? Of course, since Megyn Kelly withheld similar and maybe even more damaging information about Trump during the primaries, maybe this is more plausible than it first may appear to be.

However, the Kelly example actually shows how absurd this scenario is in this situation. Kelly withheld her evidence about Trump because she knew she had a book coming out. There is no indication that Brzezinski was had the same motivation.

But even more than that, the extremely casual manner in which she told the story reeked of, at best, gross exaggeration. I can get that you theoretically might not want to make a big deal about this type of thing when you think that Hillary might likely be the next President of the United States. However, once the election is over, and she is now powerless, why would you tell this story as a complete afterthought? Why would you give no details whatsoever? Why would your co-host move in almost immediately to shift the subject instead of amplifying this huge news that his show just broke? Why would NBC not come out and confirm such an important story, especially after it got massive coverage on other outlets?

The only logical answer to these questions is that the story itself is at least mostly false. The most likely scenario is that there was some sort of mention on a phone call from the Clinton camp that they weren’t happy with Mika. By the time that got communicated to her, was cooked in her brain for several weeks, and was marinated with the Wikileaks emails, a simple “complaint” got transformed into a demand to take her off of the air.

This is what happens when narcissistic media personalities, who overestimate their own importance in the world, translate the meaning of events in which they are part. They lose all perspective, as well as the truth.

Unless there’s more information coming forward (I doubt it), then it seems pretty clear that is what really happened here.