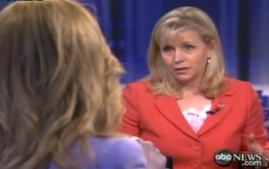 In our continuing effort to help CNN fill their 8pm slot — recently vacated by Campbell Brown — may we present out latest suggestion: Liz Cheney and Arianna Huffington. If today’s This Week roundtable segment is any measure it’s a pairing that would give the term “crossfire” a whole new meaning.

Huffington and Cheny (not surprisingly) butted heads over a number of issues today but never more loudly than when discussing the BP Oil spill in the Gulf. Huffington, who has been critical of the Obama administration’s response in recent days, today mostly laid blame at the feet of the Bush administration:

“The truth is that right now we have precisely the regulatory system that the Bush-Cheney administration wanted: full of loopholes, full of cronies and lobbyists filling the very agencies they are supposed to be overseeing the industry….It is absolutely, a thousand percent Bush-Cheney’s fault. [”

Cheney was less than agreeable on this assessment:

“I actually heard that George Bush was responsible for the breakup of Tipper and Al Gore’s marriage too. I mean it’s incredible the extent to which people are now trying to shift blame.”

Apparently, ‘let’s blame Bush’ is the new ironic punchline on the right. Meanwhile, cue the closest thing This Week will come to a shoutfest. Here’s how it ended:

Cheney: “Arianna I don’t what planet you live on, but that’s not planet earth.”

Huffington: “I’m living on this planet.”

Cheney: “What you’re saying, has no relationship to the truth. Your assertion that Halliburton defrauded the U.S. government… Arianna, it’s absolutely not true.”

Huffington:“I’m so glad PolitiFact is going to be checking this, I’m so glad.”

Now tell me that wouldn’t be a ratings boost for CNN. Watch below. Meanwhile, earlier in the roundtable Liz Cheney offered what I thought was a fairly smart take on the whole Obama emoting debate.

It’s a valid criticism, and weirdly one that echoes Frank Rich‘s column this week which argues that “the debate over how to raise the president’s emotional thermostat is not an entirely innocuous distraction. It allows Obama to duck the more serious doubts about his leadership that have resurfaced along with BP’s oil.” This Gulf spill is certainly making for some strange bedfellows.