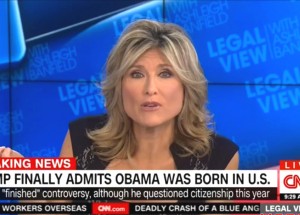 CNN’s Ashleigh Banfield was not impressed by Trump’s much delayed acknowledgement that the president was born in the U.S.

The host broadcasted several clips from the half-decade Trump spent championing a groundless conspiracy theory that Obama was not born in Hawaii. Even after the president released his long-form birth certificate in 2011, Trump continued to cast aspersions on the authenticity of the document.

In recent years, he shifted to blaming Hillary Clinton for starting the birther conspiracies (which is not true), and making more nebulous claims about Obama’s allegiances, often referring vaguely to “something going on” with him. Until Friday morning, Trump never in his own words declared that he had been wrong about the president’s birthplace.

Trump has of course repeatedly declined to make public his tax returns. In challenging Trump to be transparent with the American people about his finances, Banfield adopted a tone and style of argument that will be familiar to anyone following the campaign:

Trump did take credit for “finishing” the birther conspiracy even though he championed it and espoused it as recently as this year. He often invokes what people tell him on the Internet and his own nebulous suspicions as markers of authority. And he did offer $5 million for proof of Obama’s citizenship:

Sent this to @realDonaldTrump spox, to ask how he will fulfill promise to give $5M if assured Pres. Obama born in US pic.twitter.com/Uc751PeGrl