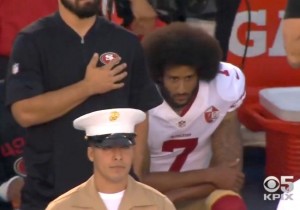 Out of 28 NFL teams that took the field on Sunday for Week 2 action, at least a quarter of them had one or more players engage in some form of protest during the National Anthem.

That according to ESPN, which catalogued all of the protests they spotted. Of the seven teams involved, five had multiple players participate in the protest.

San Francisco 49ers quarterback Colin Kaepernick — the man who started this movement on Aug. 26 when he sat for the Anthem to protest oppression against people of color — now has quite a bit of company on his own team. According to the ESPN report, five 49ers joined Kaepernick in some form of protest. Safety Eric Reid continued to kneel alongside Kaepernick, as he has for the past three weeks. While four other members of the team raised their fists.

Three of the four Miami Dolphins who kneeled for the Anthem last week did so once again Sunday prior to the Dolphins game against the Patriots. The Miami Herald reports that that a Florida police union has asked deputies to stop providing police escorts for players prior to games until the Dolphins force their players to stand for the Anthem.

“I respect their right to have freedom of speech,” said Jeffery Bell, president of the International Union of Police Associations, Local 6020. “However, in certain organizations and certain jobs you give up that right of your freedom of speech temporary while you serve that job or while you play in an NFL game.”

Prior to Sunday night’s game between the Minnesota Vikings and the Green Bay Packers, NFL Commissioner Roger Goodell expressed his belief that the protests are having a productive impact.

“I truly respect our players wanting to speak out and change the community,” Goodell said. “We don’t live in a perfect society. We want them to use that voice. And they’re moving from protests to progress and trying to make things happen in the communities.”