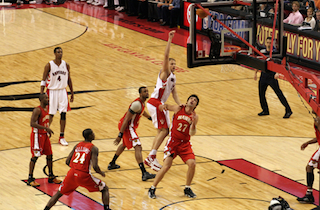 Atlanta Hawks owner Bruce Levenson announced this weekend he was selling his controlling share of the NBA franchise, getting ahead of an investigation into a racially insensitive email he sent two years ago.

Levenson had reported the 2012 email himself to the NBA, saying that it had been written during discussions on broadening the team’s demographics in light of poor ticket sales. Levenson said Sunday:

“In trying to address those issues, I wrote an e-mail two years ago that was inappropriate and offensive. I trivialized our fans by making cliched assumptions about their interests (i.e. hip hop vs. country, white vs. black cheerleaders, etc.) and by stereotyping their perceptions of one another (i.e. that white fans might be afraid of our black fans). By focusing on race, I also sent the unintentional and hurtful message that our white fans are more valuable than our black fans.”

“As Mr. Levenson acknowledged, the views he expressed are entirely unacceptable and are in stark contrast to the core principles of the National Basketball Association. He shared with me how truly remorseful he is for using those hurtful words and how apologetic he is to the entire NBA family — fans, players, team employees, business partners and fellow team owners — for having diverted attention away from our game.”

Watch the CNN report on Levenson’s email below: