Barack Obama Is Anything But ‘Our Neo-Conservative President’

Barack Obama Is Anything But ‘Our Neo-Conservative President’ 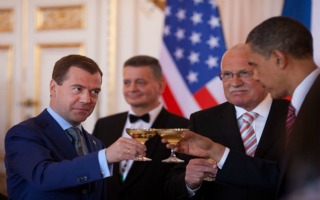 Mediaite Editor and colleague Frances Martel recently argued that President Barack Obama does not get enough credit for embracing his predecessor’s neo-conservative ideals in the pursuit of national security. Few besides the president’s most vitriolic critics would not concede that Obama has aggressively prosecuted the “war on terror.” But this alone does not a neo-conservative foreign policy make. In fact, Obama has ceded American tactical advantages to great power competitors that whole generations spent constructing. Obama’s foreign policy, outside of the war on terror, has been a disaster and a thoroughly progressive one at that.

Martel published a thoughtful and compelling argument on Wednesday that President Obama has shocked many of his detractors by pursuing aspects of President George W. Bush’s foreign policy he campaigned against with gusto over the course of his first term. In “Our Neo-Conservative President: A Barak Obama Retrospective,” Martel outlines the many incontrovertible victories that the Obama administration has won and celebrated in the “war on terror.”

Her conclusion, however, is that President Obama has embraced one of the “most conservative foreign policy doctrines in our lifetime.” This dramatically misrepresents the president’s foreign policy achievements and, to the extent that one can be identified, his doctrine.

Barack Obama has executed a counter-terror strategy with aplomb, but his handling of America’s foreign relations among the great powers – the ultimate historical constant – has been dismal. The Bush Doctrine of fostering and supporting friendly regimes in a variation on Democratic Peace Theory has been all but abandoned. This discarding of this central construct of “neo-conservatism” is not overcome by the commendable execution of the “war on terror.”

While many have wrestled with an academic definition of “neo-conservatism,” particularly during its current period in the political wilderness, that policy preference can be said to embrace the spread of shared ideals across borders. Neo-conservatism supports the advancement of friendly and like political cultures which espouse the principles of federalism and democracy. This should theoretically prevent extreme ideologies from acquiring enough power to represent a cross-border threat.

To that extent, the Bush administration embarked on a number of crusades, military and diplomatic, to develop democratic spirits in the Middle East and Central Asia – regions and peoples that were only beginning to be exposed to Western ideals at the turn of the 21st Century and, as the events of 9/11 demonstrated, were willing to push back with force. This was the crucible in which the Bush doctrine was forged, based on a neo-conservative understanding of international relations.

The Bush administration had its successes and failures, many of which are still debated. The “war on terror” – a term the Obama administration has at once deemed defunct and paradoxically declared complete and won years later– has been prosecuted zealously by Bush’s successor. Martel illustrates precisely how with these highlights:

The capture and killing of Osama Bin Laden, without regard for the sovereignty of Pakistan is President Obama’s most overt conservative statement. The breathtaking account of how SEAL Team 6 broke into Bin Laden’s Abbottabad compound garnered praise from most, even in the unlikeliest corners– remember that Romney, then one of many forgettable Republican candidates, was taken to task by Bill O’Reilly for claiming the President was generally a failure. A minority of loyalist neo-conservatives, team players as they are, praised President Bush for his work keeping our facility in Guantánamo Bay open, with little regard for how easily other Democratic leaders could have neglected to violate Pakistan’s sovereignty or risk the wrath of an already volatile anti-American population in the Middle East. Those who choose to divert all the credit for this military victory to President Bush also neglect to note the fact that Guantánamo is still open, which is already a major divergence from both the Democratic Party and the Senator Barack Obama elected in 2008, who promised his first act as President would be to close the facility. They also ignore the courageous decision to violate Yemen’s sovereignty to take out al Qaeda operative Anwar al-Awlaki– a U.S. citizen– and the fact that the President has engaged in drone warfare so much he has actually had the opportunity to joke about it.