@BarackObama’s Lost Followers: A Tempest In A Twitter Teapot

@BarackObama’s Lost Followers: A Tempest In A Twitter Teapot 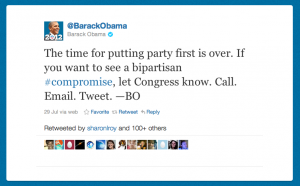 Yesterday, President Barack Obama concluded his address to the nation by urging Americans to contact their representatives and urge action on a debt ceiling resolution. “If you want to see a bipartisan compromise — a bill that can pass both houses of Congress and that I can sign — let your members of Congress know,” said the President. “Make a phone call. Send an e-mail. Tweet. Keep the pressure on Washington, and we can get past this.”

With that, Tweeting officially became a political act.

To that end, the aides operating the @BarackObama account on Twitter began tweeting out the Twitter handles of GOP lawmakers. Starting with Alaska’s @LisaMurkowski and ending with Wyoming’s @CynthiaLummis, the account sent out 113 tweets from 12:42 to 5:49 p.m. yesterday. A dense but contained Twitter binge – but enough to exasperate over 35,000 people, who unfollowed the President’s twitter account — which now doubles as a 2012 re-election account, run by Obama’s 2010 campaign staff.

It’s probably a safe bet that he — or rather, his staff — were thinking “Let’s get some information out there to our giant network” not, “Yikes we’re going to lose a lot of followers.” So they did — and everyone is now gleefully schadenfreude-ing about it. But who cares? A little perspective is in order here: 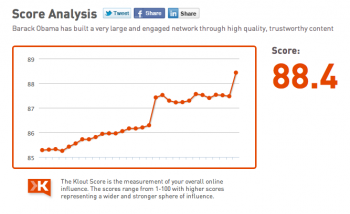 Yes. It should. This whole silly brouhaha raises the question of “What is Twitter for?” Is it for sharing important information — or for jealously hoarding followers? For the President of the United States — and for anyone in government — it should always be the former. We’re all pretty jaded about Twitter now, but what we saw yesterday was something incredibly cool: a centralized communications hub sending out actionable information quickly, efficiently and measurably. That is pretty incredible, and we are certainly going to see more innovation in how Twitter and other social media is used to campaign and message as 2012 gears up. Yesterday’s @BarackObama tweet-spree actually pushed forward in a really cool way and provided yet another set of shoulders for future social media campaigns to stand atop of.

That’s it really. Metrics matter, but substance matters more. Even so, I hope the @BarackObama people tweet this out. That would be awesome for my Klout score.

(By the way, speaking of Twitter, as far as I am concerned this is a great example of how Twitter’s raw information-wrangling tools are woefully insufficient. Tweet-benders are not unusual — I’ve been on a few of my own! — and after five years Twitter should have a method of enabling followers to opt out of seeing that user in their tweetstream until the bender ends. Right now, Twitter’s only remedy for that is the harsh, punitive and inefficient remedy of the unfollow – harsh and punitive because it chills bursts of activity, however nobly inspired, and inefficient because it offers short-term relief via the long-term loss of following a useful person – the onus is on you to refollow. I tweeted earlier that this was a great use case for Siftee, an information-sorting Twitter client for power users, for which I am – disclaimer – an advisor. Siftee has a mute feature, where you can temporarily “mute” a tweeter from your stream; apparently UberSocial and TweetCaster have that feature as well. But why doesn’t Twitter?

And, taking it a step further, why doesn’t Twitter have an easy way to collect those 113 tweets, or even count them? Or break out tweets by day? A service like Storify is a great tool for people to collect and display curated tweets, but for grabbing a big batch it unfortunately falls short (I tried and then gave up, seeing how long it would take to go tweet by tweet.) I used Siftee’s tweet-tagging tool to collect the total tweets and get the posting times, and it listed the tweet-count automatically – but as of now, that is an internal tool that I unfortunately cannot publish. Someone will eventually collect and post a stand-alone version of those 113 tweets – after all, it’s a pretty great reference – but it won’t be me, at least until the tools for collecting, sorting and breaking out information on Twitter get better. Even making a Twitter list of all those GOP handles would be a completely laborious process. (I know, I know, that’s what Hill interns are for. But still.) As I said above, the metrics surrounding this information is important but let’s not forget about the information itself – as it stands right now, all those tweets are only available at twitter.com/barackobama, as individual items or as part of the larger whole. Now that Twitter’s made it so easy to create all this content, the next step should be making it easier to curate it. (Or, making it easier for third-party apps to curate it!) Because right now, easy it is not. End of rant.)